How did we get into this? 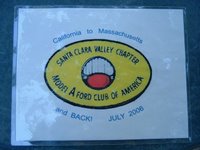 Model A Ford Club of America has a national convention every two years. This year the convention is in Mansfield, Massachusetts. Now we live in California and have attended the last couple conventions in Riverside, CA and in Portland, OR which are relatively close to us in the San Jose, CA area. On our way back from Portland in 2004, as we drove through Medford, OR in our roadster in the 110 degree heat, Pat and I agreed that we would not be driving to MA, and we made a pact on a scrap of paper and both signed it. 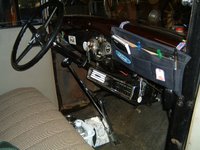 But as 2006 rolled around, the lure of the open road began to beckon to us and we realized that this is the Model A trip of a lifetime. We both agreed on one thing however, roll up windows and an air conditioner are essential cause we are just not as tough as we used to be. Well, we found the Little Black Coupe last fall, and have been working on it ever since, new engine, new transmission, overdrive, and AIR CONDITIONING! We are ready. Our club will be sending 6 cars off to MA in two groups. We will be leaving on July 6 with 3 other cars and plan on taking 10 to 12 days to get there. So stand by folks, more to come.
Posted by Pat at 5:29 PM

Can't wait to see all the posts about the adventures along the way!

This is going to be great.Can't wait to read all about your daily trips. (we will really miss our nighty meetings in your room)Wishing you and Bob a wonderful trip.
Shirley & Bob

Take care on the road. Remember you have to get back to CA in time for the China trip!

You will have a great time and we are looking forward to following along through your blog.

This is going to be so fun guys!!! Can't wait to read all about your trip - you always have the BEST stories.

We really enjoyed following along and reading your e-mails about your previous trip to Canada. Can't wait to see what adventures await you on this trip. Having pulled a camper trailer from Texas to MA and back gives us some small perspective about your trip.

I once had a hang-on air conditioner similar to yours in a 1962 Chevrolet when the kids were small. It made all the difference in the world in the Houston heat.

We can't wait to read about your adventure. Wish we were going with you! Well, we'll just wait and go with you on the China trip.
Will Ed and Linda

Thank goodness you will be providing a diversion for the part of the month when everybody is on pins and needles waiting for the precious referrals. I hope you get good news while you are on the road!

We love reading about your Fordventures and wish you a safe and fun journey.

Well, I got my reservation at the "no-tell mo-tel" in Austin. I'm planning to join you as far as Austin and then return next day. A good test run for my "new" '31 Fordor. No air conditioning, though. Pat, would you drive mine and I'll ride with Bob and air conditioner?
-Bob B.

If Bob stops by here on the way East, I'll ride back with him...if he gets the 'add-on air' by then. G
Good luck, all of you! Stay cool!
Billy B

Hi Bob and CP--Thanks for all your help in detailing a Great Trip!!I can hardly wait for a week from Thursday to meet you in Pleasanton so I can start what I know will be a Fantastic trip--You guys are the best friends one could ever ask for--I will double check my Fan before we leave--O.K??Bill Rose

I got on the site today. I can't wait to read all about the trip, and I am going with You !! Have to be careful though, Karla can read and keep up on me also so I'll have to be good...

I can't wait to read about your trip!!!!! We'll be following along on your journey!!!!

Greetings to Jack Castor
All the best to you all. Thanks for your great website! Will be following you all the way from Tasmania, Australia.

What an adventure! I wish the best to the whole gang on this adventure. I will be looking forward to updates during the trip. No matter how warm it feels it probably won't be as hot as it is here in Phoenix! Cheers to you all! Todd in Glendale AZ

This is going to be a great trip. Bill and I will be following you across the country. Look forward to all your adventures. Be sure to rate all the ice cream stops along the way.
Linda & Bill

Hi! This is Don Stewarts daughter heather! have lots of fun and be careful. Keep us posted, looks like a nice site. Take care of my dad!

You should look for another air conditioner and some side curtains for Jack Castor. He is getting too old to be roughing it.

hmmmmmm,...sounds like Bob M. forgets quickly. Me thinks air conditioners are fer wimps. And roll up windows! I'll bet Henry is rolling over in his grave.

Thanks, Patti for all the free lunches. And the free bandages,too!I swear I won't let Bob's car cut,slash,burn,crush or impale me again!Let's try driving for a change instead of disassembling and assembling engines. WHEW!
Thanks, and don't forget sandwiches for the road to Austin.
-Bob B.

Patti,
Don't take Bob B tooooo seriously, he eats really well at home, and I think you are spoiling him!
Guess who?!

Good luck Don and Jack! Bet you have a great time! Don, take lots of pictures, and leave the cell phone on so you won't have to figure out how to get messages.

Now I wish I had gone along. Oh well, I'll go shopping; that will make me feel better.

I'll be following your adventures every day.

excuse me, I'm used to videos and sound with my blog info. M better be giving you some advice! Still can't believe you are going cross country in that really old car! Marlayna

Maaan, I can feel the excitement all the way through this site to my screne... And far as Jack and Don goes, sidecurtains? air conditioning? Gee, Thats just a bunch of big fat energy slurpin stuff. Hell, Jack would be happy riding his bigwheel bike on this trip! Which he has already done... "gettin old?" thats prolly got something to do with him putting that windshield in front of him for this trip.. Jack, Don you are gunna have a ball wish i were there with yall. Oh, and. Jack? I dont remember what I did with the key to the vette. well, not to worriy i dont need no key to run that old gas through it before you get back... KIDDING :-) Bob

Thought I'd pass this along. The Explorer Post 69 X-Cup team from Ponca City, Ok, that MAFCA helped fund won their division in the Great Race. chuck