Poor ole Bronco was straining to get up the driveway this morning. Just about made it in low gear without stopping to rest. Gassed up in Milpitas and headed out on 680 to meet the Model T touring group in Pleasanton. Jorgensens and Edwards were waiting for us for 20 minutes. After we all got there we pulled out and left the Edwards and Jorgensens in typical T touring fashion.

We all met again at Denny’s in Roseville for breakfast. We ate, laughed, chatted and then checked out everyone’s rig. Well, Peder has been pushing everyone off the road with his Texas big horns mounted to the front of his truck. He even has many kinds of appropriate cow sounds coming from his vehicle.  In numbers, we have 7 modern vehicles trailering 9 Model T’s. You figure out that one.

Stopped for ice cream in Wadsworth. Mark E. checked his trailer and discovered that #34 wanted out because three of its towing straps had come undone. The left front wheel was pushing on the left side of the trailer and the rear right wheel was pushing on the right trailer wall. That speedster really wanted out. Fixed the towing straps and shot down the road to 80. Oops we don’t have everyone. Again in true T touring fashion we left the Beamans  on their own. Bob E. said I do not want to lead, I’ll bring up the tail. Well, we saw a sign that said speed limit 75 and the next thing we saw “White Lightning” streaking past us and out of sight. Finally, met him at the motel in Winnemucca.

All T’s accounted for and all nineteen people arrived in Winnemucca. Off to the Martin Hotel for a Basque dinner………………Oooohhhhh,,,,,, have you ever had a Basque dinner, you know, where they just keep bringing the food?   We now have a bunch of really stuffed T drivers.      Pat says the wine was very good, actually she didn’t really have any because the two people sitting next to her who shall remain nameless drank it all. 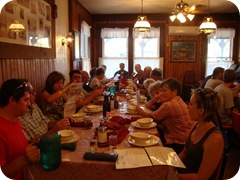 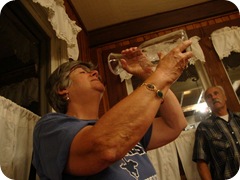 Saw this dragster across the street, he is here for a car show this weekend.  He said there is a Model T part in their somewhere.  Bob Beaman thinks we need this engine. 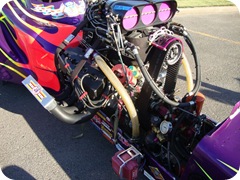 Sounds like a good day 1. How was the Basque Dinner. Yumm

You're having fun without us! Wish we were there...
John & Judy

Patti, You should have brought your bota! Marlayna

Hi Guys...Just found you. Sounds like day 1 went well. Looking forward to sharing yet another adventure with you..Be safe.
Shirley

#34 always DID have a problem with "Sit/Stay!" but you have to be firm.