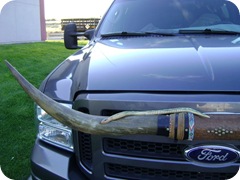 The wagon train left in smaller groups today from 7:00  to 7:15.  It appears that the horns on P.J.’s truck snagged a snake by the name of Hennrietta.  We fear that she has met her demise.   Click on any pic for a large version.

The Edwards stopped at a gas station to take a shower, or at least that is what it sounded like over the walkie talkie, actually t 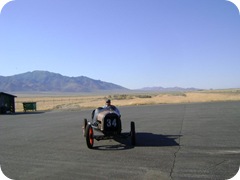 hey stopped to check a tire.    Just shows how good the walkie talkies are.   While they were stopped, Mark took #34 out of the trailer and drove it for the next hundred miles and got a good sun/wind burn.

Went thru a little town, really little town called Orovada, in which the LDS church was a modular unit and the second building in town had multiple signs which boasted of a bar, general store, motel, casino and gas station.  Missed getting a picture of that one.  The third building in town was a huge NAPA store, all of this at just a crossroads, but those were the essentials for the surrounding ranches.

Trivia: Basque, OR has a population of 10.

Had lunch at a Red Robin.  One of their specialties is bottomless root beer floats.   Like to killed ourselves, because nobody asked, they just kept bringing them until we cried uncle.  After lunch, Bob M. checked his trailer tires and found a bubble, not good, changed that sucker out.  Bob E. has a leaking tire, so far just requires filling twice a day. 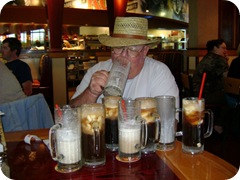 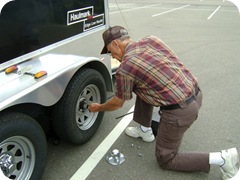 Scenery on Hwy 55 from Boise to McCall up the Payette River gorge, beautiful country, lots of rafters. Our little group of  Bob, Bob and Bob were very entertaining today on the walkie talkies.  They started asking questions about old time stuff, like characters, sidekicks, and games, like kick the can, pin the tail on the donkey, etc.

Tonight Maria J. organized a dinner at Lardo’s, local hamburger haven, good time was had by all.  Lord sakes, stuffed again.  Finishing off with some misc other pictures. 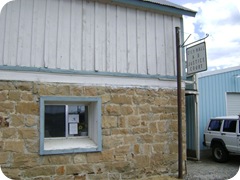 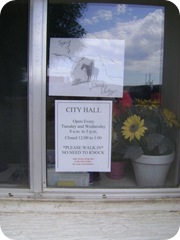 Court house and justice court in Jordan Valley, OR, they have the right idea about government, just open two days a week. 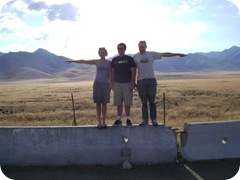 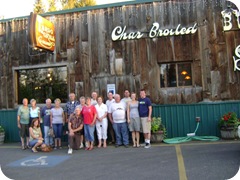 Sara, Ivan and Bob B.  founding a new church on this wall.  And lastly, our traveling group all in one place at one time (dinner).

Ha!! The root beer float story was hilarious. I can just picture it.

PS: Nice rounded corners on the pics! Seems like WLW is treating you well.

I would not have been able to resist the Root Beer floats. I had one at Camp Richardson last weekend - it was GOOD!

Glad to see you are having fun, as usual.

Boy Howdy! What a trip so far and you're not even there yet! Wish we'd have hit a place with root beer floats. At the Sonora Fair, (Mother Lode Fair), they wanted $5.50 for one, half that size, so think what a deal you guys had! Needless to say we passed.
Happy traveling today.
Judy and John

Bottomless rootbeer floats. Yes, what could be better. I think we're gonna need directions to that establishment.

We head for home tonight.

Did the snake tell you her name? Marlayna

You guys sure know how to find the good old fashioned places - root beer floats and home made hamburgers-yum Have you found any good antique places yet? looking forward to seeing you in WA
S