Well, finally got all my receipts and notes in one place and here are a few interesting facts about our trip.  We were 30 days on the road, drove through 16 states and put 6926 miles on the little black coupe. We had 90 meals out and lots of ice cream stops. Mechanically, had to deal with a broken alternator bracket (replaced with baling wire), and pulled the carburetor off and either changed it or took it apart and re-assembled it at least 5 times.  We did have vapor lock issues until I wrapped everything up in aluminum foil. I only lost two parts, an air cleaner in Michigan (forgot to safety it on with baling wire) and a turn signal flasher somewhere in Arizona (more baling wire holding the new one on).  The moral of that story is: carry baling wire and use it.

Put a set of new Firestones on before the trip and I must say they don’t show any appreciable wear, I think they are using a better rubber compound now.  We filled the gas tank 52 times, and changed the oil twice.  We had an increasing oil leak as the trip went on, don’t know why yet, that will await a little disassembly of the engine. Anyway, we added a total of about 17 quarts for the total trip, mostly on the way back from Michigan.  The Tillotson carb (when it wasn’t leaking) performed the best and got 17 mpg going and 18 mpg coming home.  The Zenith, which was on for about 1000 miles, mostly in Michigan, got a tad under 17 mpg.  Overall, we did 17.2 mpg from start to finish.

We had a great trip, lots of fun, lots of backroad adventures.  So, where are we going next?  The little black coupe is sleeping on it. 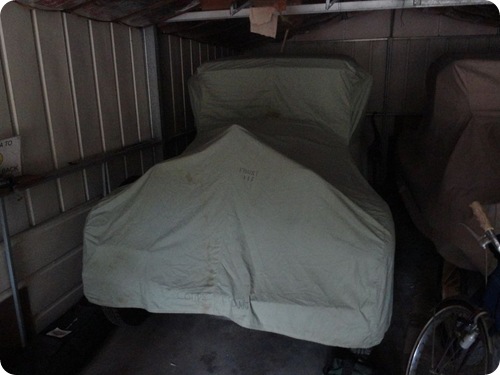 Love the stats!
So glad you had a great trip. Sounds like you were with a really great group of folks too. And I still think it's awesome that Sally and Andy dropped in out of the sky.

Another grand adventure is in the books.
Meeting you guys in Seligman for milkshakes and burgers was a highlight for us!

Enjoyed following along on your tour! Great photos and writing about your adventures. Welcome home. Now get some rest!

Welcome Home! So glad you were back so that we could spend some wonderful time together!

It was fun following your trip, seeing the sights and vicariously enjoying all those ice cream stops!

We're already booked in with your kiddo for the 4th of July next year so hope you're in town too!!

Love you and miss you. xo