Many have noted a lack of trip updates since we returned home. Perhaps you thought all was well. Well, as Paul Harvey would say, "And now, for the rest of the story. Saturday and Sunday were spend resting and trying to remember where the bathroom is in the middle of the night. On Monday, I drove the car to my traveling buddy Ted Kafer's for some engine diagnostic work. First was a compression check. Compression was 110 PSI when I left and now read 65. Decision was maybe it was only rings. My concern about engine noise was met with "its just valves". After all, I had driven well over 3,000 miles after hearing the "ugly" noise around the transmission and complaining of engine noise. Decision was to pull the engine because (1) I needed to determine source of increased oil usage and low compression and (2) I needed to work on transmission because rear seal had failed and caused me to lose LOTS of transmission oil from about Wisconsin on coming home.

Wednesday was the appointed day to pull the engine, etc. Bob Hazleton and John Guzzetta came over around 10 and Bob Meneely joined us after lunch. We had the engine and transmission out by lunch. Too bad, I had no desire for food at that point. Why you ask?

Well, first; the U-Joint came out in 2 large pieces, 20 or so small pieces and lots of bits. What a U-Joint is NOT supposed to look like! We drove this 4,000 miles after breaking? Seems the UGLY noise it made in MA was the U-joint breaking. Somewhere in WI, the pieces tore the transmission rear seal and thus the oil loss. Care to guess how Lucky I am to drive 4,000 miles home? 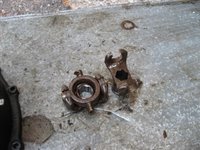 What a U-Joint is NOT supposed to look like!


Next we began engine tear-down. Removing the head disclosed that #2 piston could be slid sideways soooo much you can check ring gap. NOT GOOD. Next we removed pan. Lying in the pan is the following part. At this point, we can NOT figure out where it came from. 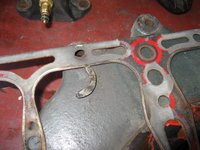 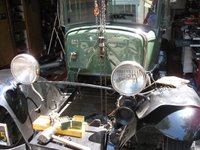 Our once proud car now sits in the garage. 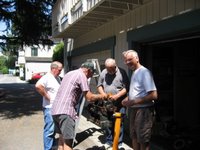 
Next, serious engine disassembly began. Removing the pistons disclosed that #2 piston was cracked. Wear in #2 was at least .030!!!! #3 wasn't so good either. Next the crank. Bad, bad wear on #2 and #3 rod throws. The inserts had worn .011 deep groves in crank so they looked like the wagon tracks for the Oregon Trail (not kidding.) The Valves were basically OK (Finally something I could use again.) So now, we are just not Lucky, but Really Lucky to get home!


Wait, there is more. On Friday I went to Bob Hazleton's and tore my 4-speed transmission down to replace seal and change OD gears. We discovered evidence of excessive heat and wear on the main shaft and needle bearings such that they will be replaced/repaired. (Probably due to low oil because of seal failure because of U-joint failure.) So Monday (yesterday), I went to transmission builder and made arrangements for new or repaired parts. AT LAST, I am starting back together! Oh, and did I mention that we are just not Really Lucky to get home, but Really, Really Lucky to get home? 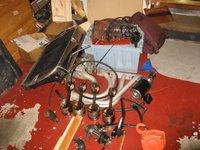 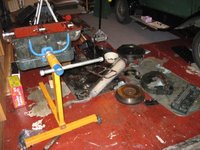 
So as I write this, the last two pictures are of my garage. You can tell that I will NOT be taking a long trip next week. Would we do it again? YES! Do I have some work ahead? YES. Also, I would also like to point out that I had over 35,700 miles on the engine since spring 2002. The transmission and U-joint probably had more than 40,000 miles as they were installed in early 2001. In no-way can I comment on the quality of the engine or transmission. It was a good run for an 76 year old girl. Just because we have made improvements, etc on the engine, many parts are still 76 year old designs and will not act like modern pats.

I am busying deciding on how to repair things and what I might change. If you want to hear the final decisions, let me know. One change for sure is to add full-flow oil filtering. It is clear that as the engine came apart, the metal parts got into the oil and destroyed everything it touched. Had I not been so far from home and had I been smart enough to tear things down, perhaps some of the damage could have been averted. However, things went South in MA and getting home became the goal. To say Susan and I were glad to drop down the final hill and see the Bay and home is a considerable understatement.

PS: I am NOT the only person tearing things apart. I know of one badly damaged rear end that came out Friday (comment was "Lucky to get Home". Why does that sound familiar?) Also, another car will not start and I know of another with a broken OD and leaking transmission. I am looking forward to reports from all.
Posted by Bob M. at 3:23 PM

Hi Dave--If you need it I have a new H&H engine on a stand,you can have it--we can not have our SCVC pres a foot--Take care bill rose

And people thought we were just sitting around drinking (lemonade) now!!!

Bill...Thanks for the offer!!! No wonder SCVC friends and Model A folks are so great. I believe my engine is on the road back to health with Sept. a reasonable target. Stay tuned.
Dave Jones

My word!!! Am I ever glad I started praying for you all, for safey on your way home!!!! You definitely are very very very lucky!!!! LOTS of angels were hovering over you all!!
Liz