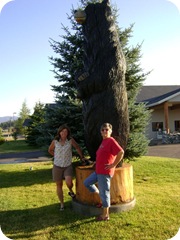 Departure this morning was at 8 with all the “wagons” ready to go.  Edwards  decided to stay in McCall until they could get a new tire and then meet us down the road.  So in true Model T touring fashion we left them.

As we drove out of McCall onto 55, Bob commented that this was the first time we had to drive down hill to a ski chair lift. The country side once again was beautiful. It was called Meadow Valley.  About an hour down the road we stopped at a rest stop by a rushing river.  Bob noticed that Bill had a low tire on 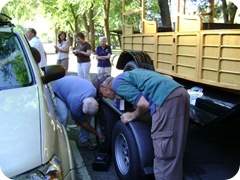 his trailer. That ‘s all it took, one little comment and all the guys gathered around to give out advice and bring their tools.  Ernie’s tire pump, Bob’s advice, Thea’s car for the plug in cigarette lighter. Ivan to drive the car, Bill’s spare and lots of kibitzers.  Just past White Bird, ID we hit a really steep hill.  Old route 95 was off to the right and it was all switch backs so we were very thankful to be on the new 95 even though it was really steep. Then down, down, down into Grangeville to an antique store with lots of over priced goodies. Caught up with the rest of the group in Kooskia in a huge traffic jam. It appears that their girls basketball team were the 2010 state champions and they were having a parade . Had we known we were going to be the end of  the parade we would have taken our T’s out of the trailers. 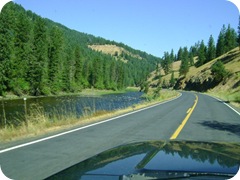 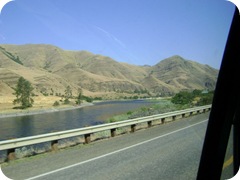 Continued on route 12 which was the Lewis and Clark trail very picturesque running along the Lochsa River. This route is labeled as the Wild and Scenic River. Just got a message from the Edwards that they had a new tire but then got a blow out after White Bird so were now getting a second new tire in Grangeville. Guess this continues the tire saga for another day.  Hope it ends here.

Oh, we saw a most unusual sight.  Coming towards us down the highway was a gentleman waving while pedaling furiously on a high wheel unicycle!  Hollered for someone to get a picture, but everyone was too flabbergasted.

Stopped in Powell Junction which was a lodge, cabins, tiny general store and gas pump for lunch. The Edwards met up with us and related their tire adventure to the group.  Oh, and mo 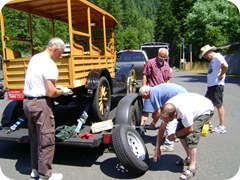 re wheel problems for Bill Bratt, loose wheel bearing, how did it get that way?

Headed out the last 50 miles to our destination, Missoula. Into town we saw another antique store with much better prices and made a purchase or two. Then on to the motel. Just in time to watch a thunder storm from the safety of the motel. Wow, it really rains here bucketsfull. 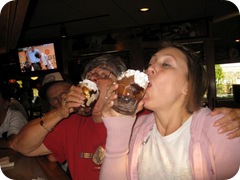 Dinner at Applebee’s. They were packed but the bar was empty so all 19 sat around the bar and had a super time. Seems someone, ???, decided to add some excitement to the already noisy place by hiding a large black spider under a menu here and there.  This incident is still under investigation.  At the end of the meal, Sara and Pat had a couple shoo ters, what is a shooter?  Look at the picture.  Walked back to the motel in the rain. Tomorrow is another day and we are still enjoying the trip.

Oh, do we know about flat tires! Tell the Edwards we're now tied for a trip. Two for us and two for them. Hopefully, we'll leave it as a tie? They are definitely no fun
You're up there in some kinda beuti-ful country now, enjoy.
John and Judy

Looked for you last night, did you forget about us?Looks light you had yet another beautiful day. Say HI to everyone for us.
Bob & Shirley