The group gathered early, folks were champing at the bit, at the Walmart parking lot in San Jose.   It was really looking like rain, so we passed out the goodie bags assembled by Guzzettas, had a quick drivers meeting and hit the road at 9 o’clock on the dot in a pouring rain.  Half a dozen Model A club members came to see us off and most accompanied us all the way to Tiffany Ford in Hollister.Down  The rain tapered off and stopped by the time we got to Tiffany Ford.   Bob Tiffany treated us all to donuts and coffee.  We did a formation park in front of the building for a photo op. Click on any picture for a bigger version. 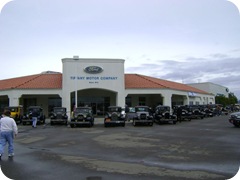 Fueled up and headed south on 25 for Coalinga.  It started to rain and did not stop until we were on the outskirts of Coalinga.  We discovered that even a coupe can leak, water somehow found its way through the top hinge in the windshield and ran down the inside.  Tech tip: When in a rainstorm, don’t talk and breath as little as possible, we couldn’t find a defrost button to unfog everything. 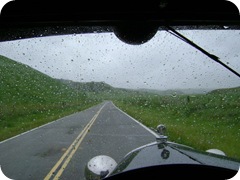 Even in the rain, it was a gorgeous drive, green green hills, lots of mustard, and cherry blossoms.  But, 100 miles is a long long way without finding a pit stop before Coalinga.  We could tell that folks were getting anxious about this because the four cars that had been trailing behind us in the distance got closer and closer as we approached Coalinga,  we were definitely encouraged to pick up the pace.

It was in this stretch that the trouble gremlin struck.  John Guzzetta picked up a horseshoe nail out there in the country and used up his only spare.  He is looking for a patch kit as we speak.

We had burgers for lunch at the Yahoo recommended Campus Drive-Inn, big burgers, lots of fries.  We refueled and then stopped at the restored Richfield gas station in Coalinga for some vintage pictures.  The docent came along and opened the gate so we could park by the pumps. 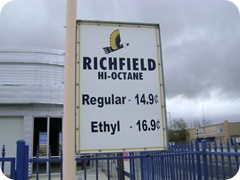 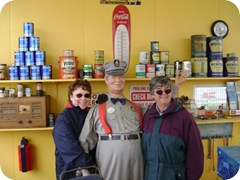 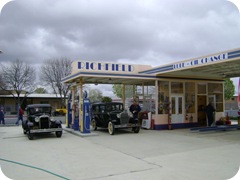 Onward to Blackwells Corner, where the claim to fame is that James Dean stopped here and bought gas just before his tragic death on Hwy 46.  Check out the picture of Pat and Carla sitting by James Dean at the soda fountain. 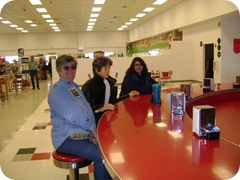 Made it into Bakersfield at about 4:30.  We were the last ones in, I guess since we seem to do the most stopping and sightseeing.  Tonight, dinner for about half the group was at the Buck Owens Crystal Palace, for some good Merican food and loud music. 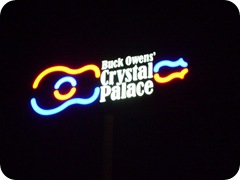 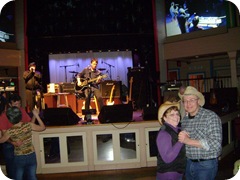 Since you two are occupying the penthouse suite at La Quinta...how's the weather up there? Wind velocity sounds to be gusting from around 40-80 mph outside....all night long. If we could rig a sail, we could save on gas today...
J&J

Glad you guys all made it! It has been raining and blowing like mad up here. Whew! Hope you see some sun today.

Hi..nice pic in front of Tiffany. I bet the donuts were yummy. Glad that you made it safely (although a little wet). Happy travels over the big hill.
L & AG

The report and pics are great! Hope the weather improved today.
Jane :-)

Made it home today in 4 1/2 hrs. is broken axle at the key. Clean break. Looks like some work in my future. Sorry to hear about Ted and Susan. Hope not too much snow today over the pass.take care and I'll be reading the blog. had a great time

When you have good company, beautiful scenery, and not too many mechanical troubles it makes for a wonderful trip.

Would you please just send the rain on down to Texas? We really need it around here.

Just keep on having fun!