Click on any picture for a larger version.  8:30  Wednesday morning and every one still laughing and ready to follow the little black coupe  out across Death Valley and hopefully back again. This is an incredible group.  We have had so many break downs and delays and yet everyone is still in a great traveling mood, and don’t want to miss a thing.

Joe D. headed back to the Bay Area today. Guess he had enough fun for one trip, actually business calls f 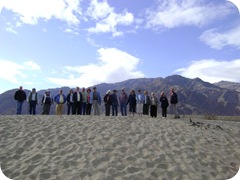 or him.  We departed the parking lot at Stovepipe Wells at 9 AM with 10 Model A’s and 4 modern cars. Stopped at Mesquite  Flat Sand Dunes and still had 10 A’s. The sand was so fine that it was difficult to hold in your hand. Bill N. took off on a hike and was never to be seen again, just kidding. We waited for him because he has the snacks for tonight!

Off to Stovepipe Well and took several pics. Abby and Buckaroo loved the fine sand and tried to find critters for us. Departed with only 9 A’s. Rodger G. still losing water even after a major overhaul the night before. He returned to the 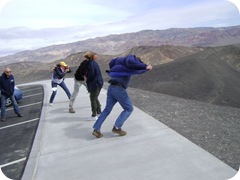 motel and rode with Joyce and Fred in a modern. Oh no, Ewart stopped. Patrick and Bill pulled over with him and used baling wire to reattach the throttle rod.  Actually we were glad to have a problem so minor.  On down the road to Ubehebe Crater where the wind never stops blowing. Everyone is a comedian. They were all standing on the edge of the crater with arms out and jackets like a sail. Luckily no one was blown over the edge.

On to Scotty’s Castle which of course never was Scotty’s Castle. We were supposed to have lunch here but due to a power outage on Monday all food was spoiled and thrown out. Now for the Model A Food Club this is a major glitch, engines, axles, head gaskets all seem to be minor problems compared to this.  But, nothing daunts this group, we ate our car snacks  and then went on tours. A very unusual “castle” down to the leather drapes and pipe organ. 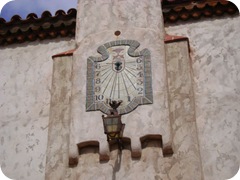 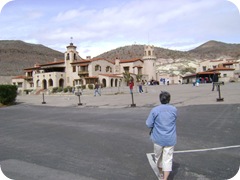 Back to Stovepipe Wells and thank goodness the Beamans had returned and what a tale they had to share. If I didn’t hear the story first hand, I wouldn’t believe it.  You know they were towed to Pahrump to a radiator shop.  When it was time to find a room in this town of 35000 people, they found that there were no vacancies because a convention was in town.  The only place available was a room at a “gentlemens club”.  Even though the rooms were supposed to be very nice and not rented by the hour, Mary declined vigorously.  And now what happens in Death Valley stays in Death Valley.  You’ll have to ask them, what a tale.

We ended the day on a better mechanical note.  Rodger remembered that he had a Gano filter in his radiator hose and upon removal found it completely plugged.  Further test runs up and down the hill were conducted and the car is ready to head for home.  The only one we cannot solve is the head removal on John Pollands car, it will not come loose, so John is going to invoke his AAA plus and get trucked to Bakersfield tomorrow.

Just before dinner, and incredible wind came up from the West, looked like the whole valley was moving East.  After dinner, I walked out and it was much calmer and the wind was now coming from the East.  Good Lord!!  Hope it keeps blowing from the east for tomorrows departure to home. 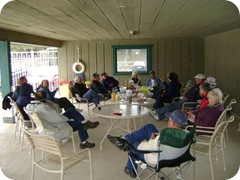 Rehashing the day around the pool, which incidentally had whitecaps.

We wish you luck on your trek back to the RAINY Bay Area. Even though you had car problems you had warm temps and dry weather (at least once you arived). We can't wait to hear the Beaman's story. We wonder if they had a "Death Valley or Bust" sign on the back of their A like they did on the T when we went to Yosemite? Will they ever tour again?? Poor Mary. Looking forward to your final stories.

Those winds coming from the east were from Kansas. We drove from Branson to Wichita on Tuesday in a high profile van. Wind gusts were 40 to 50 mph. It felt like we were riding in a train.

Raining here today. Guess it's been doing that a lot lately, especially considering the flood we had under the house. Water abatement team was back here over the weekend.