What a day.  Click on any picture for a larger version.   Here is the mechanical stuff.  In the parking lot this morning, we found out that Will Lancaster broke an axle last night.   Just outside of Boron on route 58, Ted Kafer threw a rod.  At the Tehachapi Loop Overlook, Joe Davis stepped out of his car, left the engine running and closed the door.  You do know what happened, don’t you, the smarter-than-thou car locked the doors.  20 miles from Death Valley, John Polland’s coupe just suddenly stopped.  10 miles from Death Valley on the last really long, really steep climb up to the pass into Death Valley, Rogers A overheated, even though we were getting snowflakes coming down.  He might be looking for a radiator.  The first three incidents were all rescued by the good old AAA plus memberships.  John’s 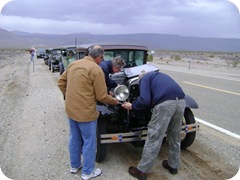 problem was solved with a roadside fix of resetting the points, which had apparently slipped. Roger just stopped, let it cool and added water, while we all  waited at the top of the hill.

And it rained and the wind blew and it rained and the wind blew.  We seemed to be at the leading edge of a storm front all day.  Poured on us up and over the Tehachapis.   We drove out of it at Mojave, but as we were stopped at the Borax pit in Boron,  the front overtook us and started to rain again.   And the wind was huge, motorhomes were leaning to the north, and our poor little A’s were buffeted all over the road.  All the way to the 58-395 junction, we had an incredible buffeting crosswind from the right.   When we made the turn onto 395, it was definitely a raise in pay, everything got real quiet, and we  barely had to touch the gas pedal.   On down the road, enormous clouds of dust filled the air at Trona.  When we got up and over and down to Stovepipe Wells, it was so nice and calm and peaceful, so nice. 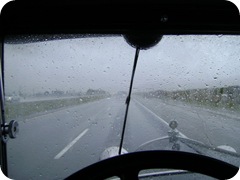 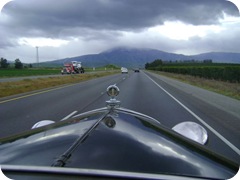 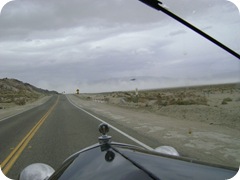 Holy Crap, is that a dust cloud?

The sights we saw today, we visited the Tehachapi loop and watched a freight train climb the grade passing over itself,  3 engines in the front and 3 more in the middle.  This was a big hit with the touring folk.  http://www.flickr.com/photos/rmnly/5545731636/

Then we stopped  at the Apple Shed in Tehachapi and cleaned them out of apple turnovers.  Onward to the open pit borax mine in Boron, one of the largest in the world, impossible to capture in a single picture.  So we took a video of it and panned back and forth. 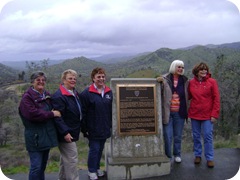 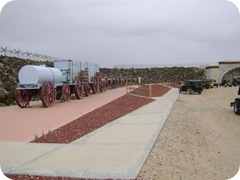 And here is what a yellow paint job will get you, a model from England draped all over your Model A.  Is this pickup a pickup? 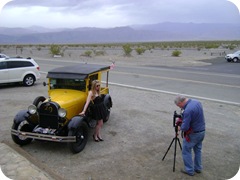 Chuck Elderton guessed it...we had her packed in our extra-parts box in the back of the pickup. You never know when you're gonna need a new...
Youch...Judy just hit me.
J

What a day! I'm thinking tomorrow is going to be CAKE compared to today. :-)

Holy Moly....I hope that's the end of the scary stuff. I thought only T's had bad luck.
L & AG

We were happy not to see Meneelys or Beamans names in the "troubles" list!
Mary checked the house and all is well.
We put the fire out quickly and the flooding water helped. I'm sure Bob won't have any trouble cleaning up the fallen trees. (just kidding!!)

I thought this was a trip to Death Valley for the people and not for the death to the A's !!! :) Hope no more trouble. Still sounds like a lot of fun anyway. We'll be checking the blog daily

All that in one day, wow! Glad to see you're all still smiling.
Jane