After the Pony Express Tour last summer, as we were driving back from Wyoming along with the Guzzettas, we were philosophizing about where we could go in 2011.  I suggested Death Valley, and we all agreed that would be a great destination.  And so the seed was planted.  We figured March might be about the right time for wildflowers and we knew we would have to make reservations early since winter is the tourist season in Death Valley.  We talked about it some more after we got back and decided to go for it last November.  Guzzettas volunteered to make a logo and Patti started looking into room reservations and I started laying out an itinerary.  We figured maybe 4 to 6 people in the club would be interested.  Imagine our surprise when we ended with 19 cars signed up.  Wow!

When the departure date rolled around, 15 A’s rolled out, accompanied by three moderns, and one A on a trailer.

We did have some mechanical glitches:  One broken axle (Lancaster); Two flat tires (Guzzetta and Bratt); One major engine failure (Kafer); One stuck valve repaired in the parking lot and maybe another one getting ready to stick (Wildman); One blown head gasket and head stuck too tight to be removed (Polland); One suspected blown head gasket that finally turned out to be a plugged Gano filter which was promptly removed (Griffin); One fan into the radiator and a side trip on a flatbed to Pahrump (Beaman); One throttle rod worn and fell off (Spear); One leaking radiator seam repaired in Ridgecrest (Elderton); One ignition wire failure solved with alligator jumpers (Beaman); One partial carburetor failure on 101 nursed home with a partial choke (Beaman); One rattling fan which was simply removed as excess parts (Nicholson).  My only contribution to this list was a lost manifold nut which masqueraded as a rich running carburetor making lots of exhaust fumes.

We must say that Mother Nature threw us a few curves. We had lots of rain the first two days and a few snowflakes on Towne Pass going into the Valley.  In the Valley, the weather was changeable but good for the most part and the mountains all around had snow on them the whole time.  There were a few wind blasts here and there with blowing dust and muddy raindrops, but they missed us for the most part.   Sunrises were spectacular if you are an early riser like me.

Now you might ask, why would anyone subject themselves to all the above?  Did anyone have a good time?  Strangely enough, I think everyone in the group had a great time. Just ask them. The vistas were vast and the scenery was spectacular, the camaraderie was great and the mechanical glitches were just little challenges that afforded these Model A guys the opportunity to apply good old American ingenuity.  And gave the ladies a time to chat and rest.

Here are some statistics.  My odometer showed 1374 miles.  I averaged 18.5 mpg.  I added 1 quart of oil and no water.  After Glenn’s stuck valve, I kept adding a splash of Marvel Mystery oil just in case.  Estimated total mileage for all the A’s has to be at least  17000 miles.  15 A’s wheeled out, 12 returned under their own power.  That is probably a higher attrition rate than we normally encounter. 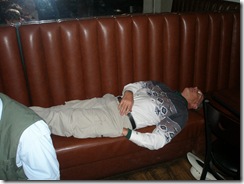 Supposedly what happens in Death Valley is supposed to stay in Death Valley, but  we have too many people talking which is why Patti made me post this picture.  This is why I got kicked out of the saloon at Furnace Creek.  And don’t forget to ask Beamans about the gentlemens club in Pahrump. Also, seems that some drivers do not listen to their wives warnings. Rodger ran out of gas. He’s not talking but N is.

Thank you to all of the wonderful people who participated in this tour. You are the ones who made it great. Of course we would never have made it without the modern car tail gunners this time, thanks.

Not much to add, except to echo Bob's sentiments. We've experienced more memorable, once-in-a-lifetime motor trips in our Model As than in any other auto, and good folks like our traveling companions enrich the tour.
Bob & Patti's concept of touring also makes each trip that much more fun. Thanks to all the intrepid explorers who came along...
John & Judy

Paul and I have both so enjoyed reading the blog each day and envisioning all the "adventures" you were having. We so wish we could have been there too, but it certainly helped being able to experience it vicariously! Glad you're all home safe---look forward to hearing even more in person. :) Jane

Good trip. Good stories. Good to be home. What are we readers gonna do for entertainment now?

Thank you so much for sharing your latest adventure! We really enjoyed "traveling" along with you.
Chris and Sharon

Thoroughly enjoyed reading your blog. I always enjoy following Model A trips to places I haven't visited - yet. In spite of those pesky problem it great everyone enjoyed the trip.

Wow, what a trip. good job all.
Always fun to read about your travels with your marvelous Model A's. It kinda feels like i'm reading the Hollywood section in a 1930's newspaper about the latest comings and goings of the movie stars.