Departed at 7:30 from Las Vegas. It is very early in the morning in LV and no one is out on the streets. Wonder where all the peeps are?

It was a long drive to Kanab through beautiful Utah with all the red mountains. There was some discussion whether it was 100 miles to Kanab or 200 miles, depending on whose GPS was looked at. We arrived about1:15, mountain time.

What a sight, Model T’s going in every direction just like in the old time movies.
Found many SCVMTFC members, Bratts, Roeders, Archers, Barellas, Azevedos, Jorgensens. Rumor has it that the Kepplers are here but we haven’t found them yet.

First order of business was to check out the huge goodie bag filled with great “stuff”. Then off to have our picture taken with our T in front of the waterfall. Then unpack and leave for the picnic at the park.

All of the 198 cars had a BBQ at the town park. We started with a radiator cap contest, wow, these T people are very creative. After dinner and great entertainment, the townspeople were invited for ice cream and they got to vote on the radiator caps also.

After the picnic, we had a five mile parade through and around Kanab. We must mention that Kanab has one traffic light and it will be the only light during the whole week. We crisscrossed paths several times with the T’s while everyone was waving and blowing their horns, what a sight. Try this little video of part of the parade: http://www.flickr.com/photos/rmnly/3653166886/

There was a cop car parked on the side of the street so naturally everyone slowed down. The Kanab police department budget must have been drastically cut because behind the wheel was a manequin…..

“I don’t think my horn has ever been blown that much.” “My horn stopped working, it’s worn out.”

Quote of the day from Chuck about half way to Kanab: “If you had taken my number, we would be there by now!!!”

Gotta go, the road awaits this morning: we will add pictures later today, check back.

OKAY, here are the pictures: T's lined up at the park; some of the folks after dinner; Chuck was having a birthday; 3 motor meters that are eyecatching. 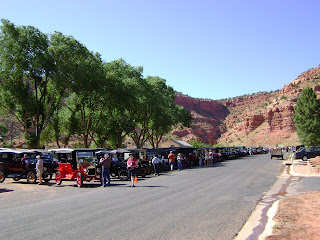 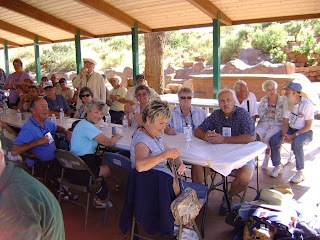 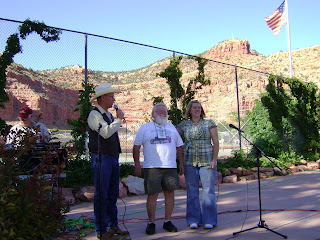 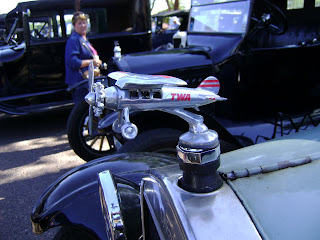 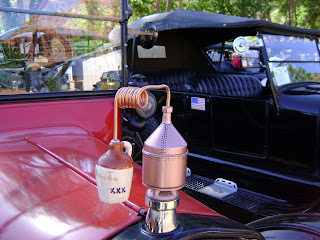 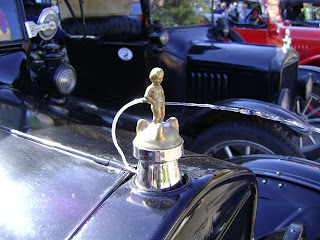 Hello to you all.... Sounds like Kanab welcomed you with open arms...Happy birthway Chuck.(patti give Chuck a birthday hug and kiss for me)I was gonna ask Ray but I think Chuck would rather you do it...Hope you all have a great day 4 and we look forward to seeing some pictures later today.
The Madam

Cool caps! I like your still....very clever (I remember those shakers)
And don't think I'm not admiring the TWA cap, I bet that prop spins as he drives.

Great trip!!! Happy Birthday Chuck!
Nice to see all the "T"s. And the amazing radiator caps.
Barb and George (the other Fontaine) say "Hi".