7:00 am, the group is looking a little tired in the parking lot. But each of the 5 cars gave a thumbs up and away we went. (Meneelys, Christensens, Fontaines, Roeders, and Bratts) Only 130 miles today, but somehow it took all day, getting back at 4:30, we just can’t resist stopping at anything that looks interesting.

Today our destination was Cedar Breaks National Monument, which is over 10000 ft. Took quite a bit of low pedal for this old non-Ruckstell T. Chuck discovered a 5 gallon hill with only 4 gallons in the tank. Fortunately, he carries extra gas, otherwise one of we other folks would have had to siphon of a quart each.

Beautiful colors, beautiful views awaited us on top. And of course there was a little extra adventure for Ray, Bob and Bill. From the Cedar Breaks first viewpoint, Bob could see a higher viewpoint in the distance with a dirt road going up to it. Couldn’t resist it, 3 miles of steep up, through a snow bank and finally arrived at a 360 degree view from Salt Lake to Grand Canyon at 11,307 feet elevation. Who would of guessed that a T would go that high? We got to the top and discovered that we were looking down on a ski resort. Had a great lunch while we enjoyed the view.

After we came down, we collected Chuck and headed for Kanab. As we got about halfway down, Chucks left rocky mtn brake began to smoke like mad. This was a mystery because he had not been using it all that much. Chuck pulled off and backed off on the adjustment and we took off again. Pretty soon the right brake began to smoke out on level ground. More backing off, and we made it on back, but Chuck isn’t real happy with the amount of braking that he now has.

We did stop at the Moqui Cave, which is a big cavern in the sandstone bluffs. Finally got back to Kanab, glad for some air conditioning, temperature felt like about 100. We need to check all our bolts, Bill found everything loosening on his depot hack.

Pictures for today: T’s climbing up to Cedar Break; Karen & Ed admiring the view; the colors of Cedar Break; watch out for the snow; 3 intrepid T drivers at the top; T’s on top of the world; beautiful alpine zone (we were on that highest peak) 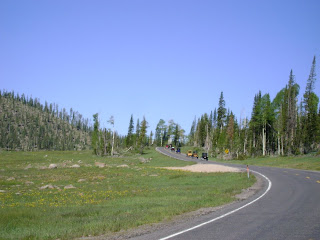 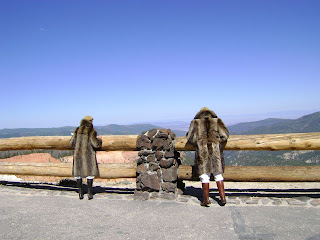 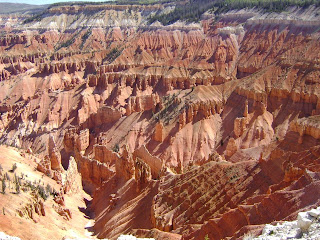 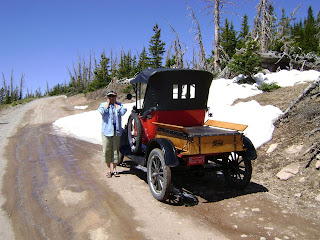 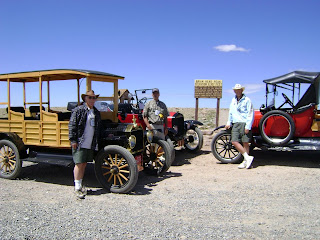 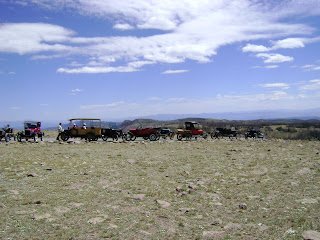 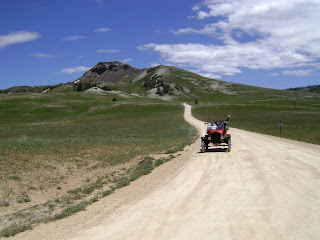 Im confused! first you complain about the heat and then you show me pictures of people in fur coats! Marlayna

Hi Guys... What great pictures...That pic of your truck Pattie,would make a great xmas card.. Beautiful scenery . Glad to hear that everyones cars are doing good What kind of temps are you having. those coats thru us...For OLD people you guys are really doing well...Later
Shirley

What a great trip!!! It's neat to read all about your adventures. You know how to have a good time...I've experienced this first hand and can't wait to do it again!!

PS - Keep an eye on my blog. Called M3 last night because a weird batch showed up at another Ontario, Canada agency (not mine) yesterday and held referrals for March 21st and MARCH 23rd families!!! Not sure what this means but super excited to talk to my agency when they open later today!!!