ON THE ROAD AGAIN - Epilogue

Here are some interesting tidbits about our trip to the Model T Ford Club National Tour in Kanab, UT. 197 Model T’s and about 425 people were registered. I think our club, the Santa Clara Valley Model T Ford Club, had the biggest showing, we had 11 cars, and 25 people. I believe that was even more than the host club. There were T’s from 29 different states and two Canadian provinces. We had members without cars from England and Costa Rica. The state with the most registrations was California with 85 cars, then Arizona with 27 cars, then Colorado with 12 cars, then Washington with 9 cars. The farthest state represented was Maryland, then West Virginia, then Ohio. There was one car from Ontario and two cars from Alberta. Most everyone trailered their T’s to the event but one hardy soul actually drove from West Virginia.

For us, we put 1500 miles on the old Bronco and trailer and about 650 miles on the T including our little jaunt down the Las Vegas Strip. We had an altitude range from 4000 feet to 11,300 feet and the T never missed a lick although it got a little weak up at the highest point. In our group of T’s, the only glitch was a sparkplug failure on Ray’s T. Coming home, it was hot, over 100 degrees all the way. This caused some trailer tire problems for Chuck in Bakersfield.

Russ Furstnow and his family and a small cadre of members from the Canyon Country Model T Club put the event on and did an outstanding job. This was the 3rd Canyonlands Tour and they don’t plan to put it on again, so if you missed it, you really missed it, it was great!!! What a great place to drive a Model T!!! What fantastic scenery!!!
Just one picture: one of the driving T’s loading up and getting ready to return to Iowa. that's a little camp trailer on the back. Can you believe it??? 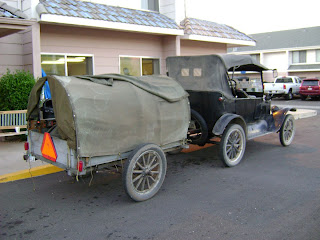 Thank you Bob and Patti.. End of a great story...Thanks for sharing..PS Love that trailer!!!!!!!
Bob & Shirley

Gald you had a great trip. and yes I remember Mrs Calabash. Marlayna

Well isn't that trailer cute as a bugs ear!!!
What a nice way to come along with you guys on the hub trips, and who would have thought it could've been possible back in the Calabash times. Not even an inkling. Thank you for keeping the blog going along with you "T".
John and Judy

glad you're home safe friend and had such a great trip!! It was fun to follow along and hear about all your adventures. The videos were such fun to rock and listen to.