Well, we are off tomorrow morning for the Model T Ford Club of America National Tour in Pincher Creek, Alberta, Canada.  It will take us three and a half days to get there pulling the trailer with the 1919 Model T inside.  Only two cars from our local club are going this time, us and the Bratts.  So we have two Pat’s, one Bob and one Bill traveling on this adventure.

The Bronco has a new mass flow sensor and new plugs and plug wires, so maybe we won’t have the hard pull miss on the hills and the 1919 has a new carburetor, the old one just seemed to be getting harder and harder to start, the new one fires right off.  The T is stuffed in the trailer and we are loaded with spare parts, tools and clothes for all kinds of weather. Hopefully we won’t need any of the spare parts.  So wish us luck. 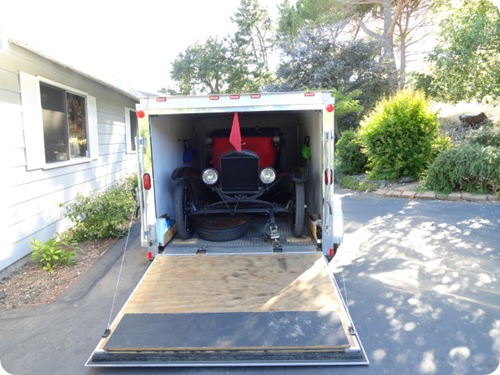 The red rag is like an idiot string, supposed to keep the idiot from hitting his head again in the 5 foot door.  I’ll let you know later if it works.

Have a great trip! You're travelling to my favourite province (other than home) so have a great time! Will you be taking in the Calgary Stampede? Looking forward to hearing all about your adventures and then when you're done....to seeing you! We'll be waiting for you when you get home! Yay!!!

Have lots of fun and lots of good luck on your drive. We will be keeping up with your blog.

We flew over Crater Lake yesterday on the way to Seattle and it is so beautiful from the air. We thought about you driving northward.

Good idea about the red rag. Maybe I just need to tie a red rag onto Will Ed's pocket knife before we go to airport security lines! He forgot it again!

Wish we were there! Safe travels and have fun. I guess your nickname should be "Beepers". Get it? "B & P 'ers"(Bob & Bill, Pat & Patti)Look forward to reading your blog.
B. & M.

Have a great trip and don't forget to watch out for your hand too! I like the red rag. Wish we were there with you.
Mary B