Drove down, down, down the mountain this  morning to retrieve our cars and try to get an early start for Canada.  All nine cars finally arrived at the storage field and we headed off  to enjoy the Montana scenery. Lots of mountains, pine trees, lakes and Model T’s traveling north Hwy 93.  Headed directly to the border and there were about 75 T’s in line. It took us 45 minutes to get across into Canada. We stopped at a cute gift shop and then on to the gas station. They had a sign taped to the gas pump, NO Gasoline until Wednesday! Can you believe that? We thought we were going to visit a town in Canada, but it turned out the gas station was the town.

Next stop, lunch by the Tobacco Plains Indians at their hall. It was a fund raiser to benefit their young people.  We promised ourselves chocolate milkshakes when we got back across the border into Eureka.  Back across the border only took 20 minutes this time, but the line on the other side coming into Canada had increased to a mile in length and must have taken at least 2 1/2 hours. As we were waiting to cross, we could see the sky darkening ahead and lightening striking. As soon as we cleared customs the clouds opened up.  We hurriedly put on our side curtains and then helped Ray put up his top. Some folks had no tops (Bob and Mark Edwards) or tops but no side curtains. We had a real show lightning, thunder, hail stones and blowing rain.  Ray and us spied a drive thru lumber yard shed and waited out the storm there.  Across the street from us were a bunch of T’s all stopped and turned with their backs to the wind, kind of like a herd of horses.

This little bitty rain storm didn’t keep us from stopping in Eureka for choc milkshakes and visiting for an hour or so.  Bob E. was so wet that his money that he had stowed away in a plastic container was soaked and stuck together.  The waitress was not impressed. Under his chair was a puddle as he sat and dripped on the floor. Mark explained that the rain came down so fast that the floor boards could not drain fast enough but started to collect a huge puddle. He almost had to bail out his speedster.

The Jorgensens finally arrived at the milkshake stop.  Maria stopped at the table and said, “Oh my,  is all that water from Bob E.? Geeze that is really a big puddle.” The owner of the restaurant said that he had never seen a rain storm such as this. The streets were flooded and sirens were screaming as fire trucks went up into the mountains as lightning had struck a house and caused a fire.

Eventually all made it back to Whitefish on top of our mountain and made plans to leave for tomorrow’s adventure at 6:45 to Glacier Park.

We are thinking of auctioning off the “skull” that was tied to our car to the highest bidder since it weighs about 20 pounds and the owner will not confess it is his.

Here are a few pics, click on any one for a larger version. 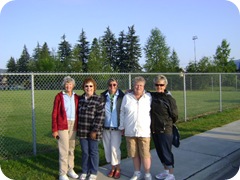 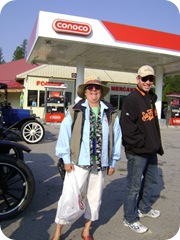 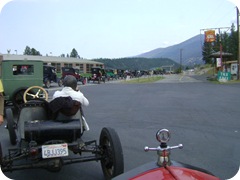 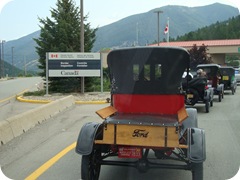 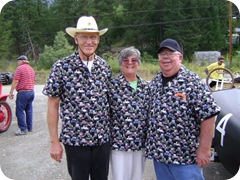 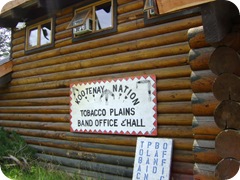 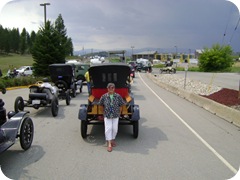 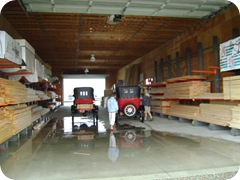 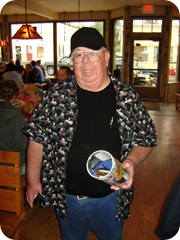 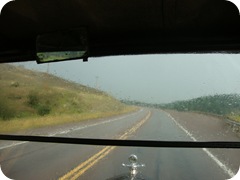 Sounds like the waitress wasn't sure if that was all RAIN water under Bob E chair.. Have a good tomorrow.
Shirley & Bob

Oh man, you guys are having some serious adventures!!