The mountain has scored again, Ray’s Suburban is in the shop with a dead transmission.  It happened going down, not up, so is it a coincidence, or a delayed result on that first days climb.  Coincidence, I think not, the mountain is laughing at us, probably angry that we are not driving the T’s up and down. So,,,,, we left Ray by the side of the road in true Model T touring fashion and forged on.

Click on any picture to get a larger version. 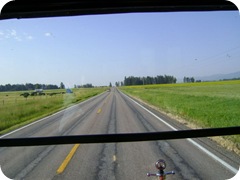 Today a loop around Flathead Lake, 158 miles, all our T’s still hanging in there.   And as one native here remarked, summer arrived today.  Chilly morning, giving way to warm-hot late afternoon.  Our morning route down the east side of the Flathead Valley took us through mile after mile of cherry orchards.  The cherries are just now ripe and being picked and there are many many cherry stands and u-pick orchards along the  roads.  $2 for a basket of bings or rainiers. Huckleberries for $10 a pound. We sampled the various kinds of cherries, and probably ate too many, hope nobody gets a belly ache. 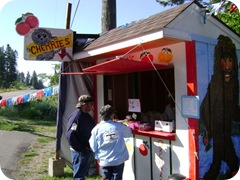 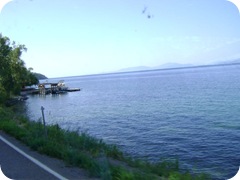 We went round the Lake to Polson and the Miracle of America Museum.  You Model A types may remember stopping there on our way back from Calgary.  It is still growing, the amount of stuff to look at is overwhelming and just as disorganized as it was in 2002. 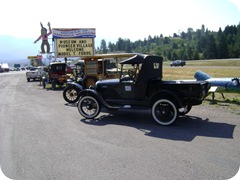 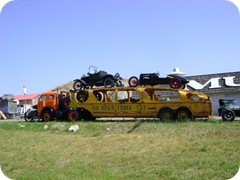 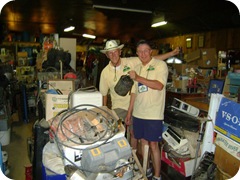 After lunch, the T’s bombed up Hwy 93 back to Whitefish, pulled off to check out an antique store, which turned out to be closed, so we turned around in a ddriveway and the owner came out and offered us a beer.  We probably should have taken him up on it becuse he had a nice deck facing the lake. 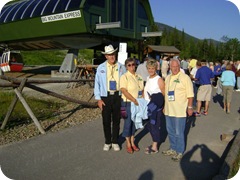 This evening we took the chairlift to the top of the mountain for a catered meal.  This was definitely a highlight of the trip.  The views at the top of Big Mountain are marvelous, from Glacier Park in the east thru south to Flathead Lake in the south to probably Canada in the north.  We hung around on the top until the sun set as a red ball in the west.   Bunch of tired puppies here. 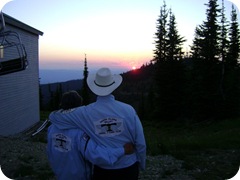 Did I mention that the SKULL made a return appearance? 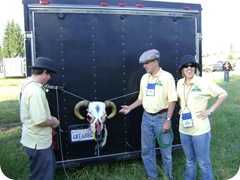 Here’s a couple fun videos. Click on the titles below and then click on the icon in the lower right corner to get a full screen version.

Top of the mountain

Down down on the lift

Looks like a fun day. Love the picture of you looking at the sunset at the top of the mountain. We can picture the drive today as we drove around the lake a couple years back. I nearly made myself ill eating too many fresh cherries.

Glad you're having fun!!

Hello everyone...Sorry to hear about Rays car troubles. Beautiful pictures and what a great shot of the sunset...Glad your having a good time...Keep safe
Bob & Shirley

Nice report, sorry to hear of Ray & Linda's tranny problem. Spectacular scenery, you really caught the spirit of the evening with the shot from your backside of the sunsetting!

Just think, Patti & Sam get to enjoy all that Montana has to offer for 6+ months of the year.

Be safe and keep the fun photos comm'n.
RG

Not as good as being there in person, but we're enjoying the blog and pictures immensely. Have a wonderful time at the banquet and safe travels to all of you.

(Just kidding.) We are loving this blog. Thank you so much!

Looks like a great day except for poor Ray's car.

It was HOT here today --86 in the shade. We were at the pool until sundown -- closed it down. The girls sure had a good time. They miss you guys though, keep asking when you're coming to see them.

Nice movies. Sorry to hear about the Fontaines. Checked the Depot Hack on the way up the hill yesterday= $8800 @ Don Ritchie's in Escalon, also a T Speedster for $7800. We gotta get a T.
John & Judy
Going to Ione this morning to tour the big brick reformatory with the Sonora group....

hey, I thought that was you checking us out! greetings from Canada!