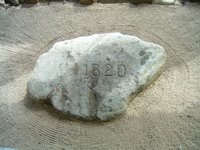 Took a little tour to Plymouth today for some real history. Stopped to see "Plimoth Rock" which is very small, the Mayflower II which is also very small, and then on to Plimoth Plantation. It was extremely hot and humid but that didn’t seem to bother the Pilgrims in their traditional clothing from 1620. Each person took on the character from someone on the Mayflower. These characters were very knowledgeable about everyday life in Plimoth in 1620. One hundred two Pilgrims sailed on the Mayflower and 100 arrived in Plimoth. During the next six months half of them died because they were so weak from their journey. 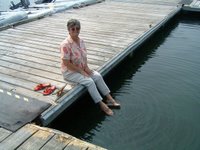 We walked to the shore and Pat had to dip her feet into the Atlantic. Now it is official, we have gone from coast to coast. The water isn’t as frigid as the Pacific but a bit chilly.

A blogger “Sparky” from Mary-Mia’s blog stopped by to see us! It was a real treat to meet Donna, Bob, and their dog Sparky from Mansfield. 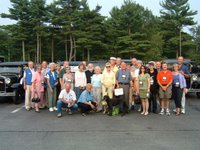 SCVC members took a group picture in front of the Holiday Inn . This was quite a production. Hopefully we got at least one good group shot.

Did we mention that our little black coupe has an air conditioner in it? Well let me tell you that Pat is one very happy traveler, especially in this weather. All she wants to do is ride in the car.

Went out to dinner and on the way back it started to rain. This was a real eastern downpour. Vicki was following behind us in her rented explorer with both windshield wipers on high and couldn’t see. How do you think we were making out with half of a wiper? We also had to drive through rivers on the road but we did make it back to the motel. We are packed and ready to head out early tomorrow morning. It has been a great Model A convention. I have a difficult time remembering that we are only half way on our journey. This is what the Guzzettas did today:
- Toured Newport R. I.
- Went to the summer house of the Vanderbilt’s
- Dinner put on by MARCOM. (Model A Road Club of Massachusetts)

The dinner pics are on the homepage of blog, and here are a few more:
Summer House, John, Judy

OK, first I thought my folks had misspelled the name Plimoth (gasp!), but then I found this note online, phew!:

"The unusual spelling of the name “Plymouth” by Plimoth Plantation is often questioned by visitors to the museum. The answer is that it is an old-fashioned spelling used by Governor William Bradford in his history of the colony, Of Plymouth Plantation, which was adopted to differentiate the museum from the modern town of Plymouth."

Happy trails tomorrow - hope you have a great sendoff. So glad you got to meet the Sparky family!

Hi to everyone. Great pictures. Well its time to start on your journey home. We are sure looking forward to meeting up with you on Friday. Saw Linda Schneider today. She is doing OK. Nedra is a BIG help to her.Enjoy your trip to Niagara Falls (STAY AWAY FROM ALL BARRELLS) Have fun. See you soon.
P.S. Our coupe has a air conditioner too.

Wanted to put up a link to this funny picture Glenn sent me. Apparently my dad wanted to get a quick haircut while in MA, and instead of going to supercuts he ended up getting a cut from Vicki. Funny!

OK M3 you are in trouble now. We did get a chuckle out of the pic.
mom