Advance scouts sent off to the East 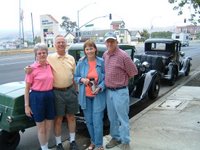 Today, the first two of the Santa Clara Valley cars departed for Massachusetts and we six who are leaving next Thursday waited with bated breath for the first report from Dave & Susan J and Ted & Susan K which follows:

"We are happy to report that the Scouting Party has safely arrived at our first days destination--Winnemucca, NV. While not without incident, we learned several things. First, there is water East of the Sierras. We ran into no fires, although firewater 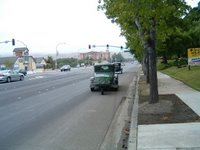 is readily available if you have enough wampum. Don't worry, we left plenty for the main party next week.We were not attacked by the natives, although their behavior seemed strange. On several occasions, we noted young native ladies standing by the road. They were most excited to see our Model A's, although disappointed when we didn't turn out to be John, Bill or Bob B. They said they were "Ranch" girls, but they were dressed different than any farm hands we have seen before. They sure didn't seem dressed to ride horses. Fuel for the horses is no cheaper than home, so bring plenty of that wampum. At one point, the trail was blocked for some unknown reason, so we had several minutes to meet other natives while stopped dead on the trail. All seemed friendly.

Several issues arose during the day. The grand experiment with Crankcase Ventilation devices was a flop!!! Both cars began to leak oil out the side of the block, out the rear main, out the pan, etc. At Donner Summit, the devices were removed and the cars operation seems to 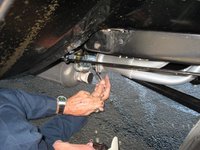 have returned to normal. Dave had a spark plug wire come off (again). The major issue was Ted's muffler. Dave & Susan noticed that Ted & Susan's tailpipe was loose early in the day, but didn't mention it for awhile. When they did, Ted decided to wait until lunch. Bad choice. It broke the flange before lunch. We limped into Fernley, where the muffler fell on the ground 50 ft. from the repair shop. Ted had it welded, but it seems to be breaking again and we are unsure about tomorrow. Baling wire or open headers seem to be in Ted's future.We are off for a Basque dinner and then will look at the cars." ~ Dave & Susan J.

Ooooh how exciting!!!! I can't wait to follow you guys on your journey!!

It is wonderful to have a scouting party. Good luck today.

Judy & John said...
Your travelin' buddies, I think,,, are rarin' to go!!! and you will too! It will all fall into place, as with past long haul trips, at the last minute...so not to worry. Love those picts! It looked like our car when we were heading out for Kansas City!
Nothing sadder than a Model A without its engine....Thursday's commin'

I replied to Dave's e-mail about the "ranch hand girls." Told him, if he meets one named Debbie, tell her I'm dead!
-Bob B.

Thanks for the update Bob and Pat. Were looking forward to reading about your trip.Good luck to the scouting party on day 2.

This trip sounds like a lot of fun! I hope you guys have a good time!

fANTASTIC TRIP FOR SOMEONE WHO DOESN'T DO OVERNIGHTERS!!!!!!!!!!

How what??Here it is 8:19 P.M. Sunday and no word from our scouts--Do you think they are interviewing for "Ranch Help"??Bill R.

Maybe the Basque dinner did them in? Mary B. is not too happy. I told her there's not too many restaurants between S.J. and Austin. So, I need a "manifold-cooking" recipe for Spam and beans. She's not being cooperative. Will it heat better if done seperately or all together?
-Bob B.

HAY BOB B. THROW IN A WEDGE ONION AND A BILL R. GARLIC CLOVE AND YOU GOT SOMTHING HERE.