Tehachapi to Las Vegas.  After all the heat yesterday, this group was a little apprehensive about going through the desert, especially Baker, Ca with predicted temperature of 110 plus and knowing that just the other side of Baker is “THE HILL”!!!!!, 20 miles of uphill climbing.  So, we decided to leave early, we were on the road at 5:30AM.  Can you imagine that, this whole group getting up that early?  I must say it was nice and cool, and very enjoyable all the way to Calico Ghost Town.  Part of the group shown here.  Click on any picture for a larger version. 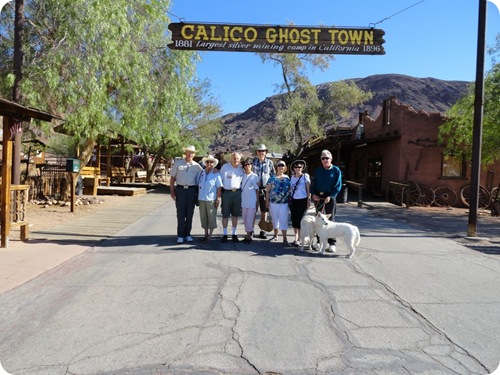 We got there so early we did not even have to pay admission, it really was a ghost town. 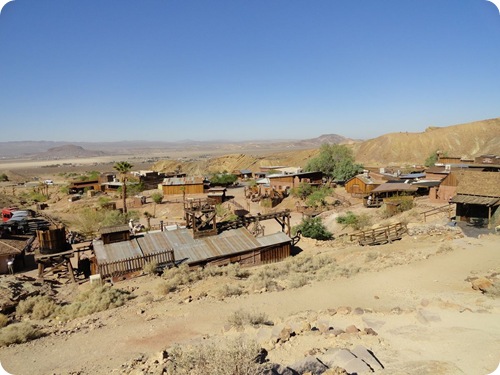 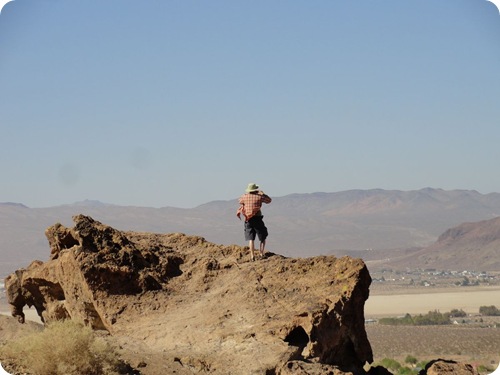 So we trekked around through the town and enjoyed the artifacts, and some of the shops that finally opened.

And then,,,,,,, we pressed on to Baker and THE HILL!!!!!! And you know what?  It was a non-event. Even though the temperature in Baker was already up to 100 when we went through, all the A’s made it to the top without boiling.  42 minutes on the climb, 900 feet up to 4730 feet.  Now that is a climb!!  We did do a little maintenance at the top, however.  John Polland’s car has been losing power periodically and we have been swapping plugs, checking compression, points, etc.  The symptom was that after 30 minutes or so of running, it would lose partial power, so we would stop, fiddle with it, change something and it would be good to go, and 30 minutes later same thing.  We did this maybe 4 times and finally changed the condenser, and we think the problem is gone. I thought these modern condensers never failed.  We have these little roadside seminars periodically.   “Say, John, I will trade you a condenser for a hose clamp.” 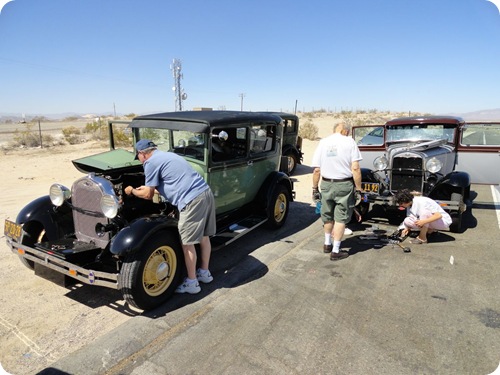 Everyone into Vegas by about 1:30.    We Meneelys went and met our kids and hung out with them. 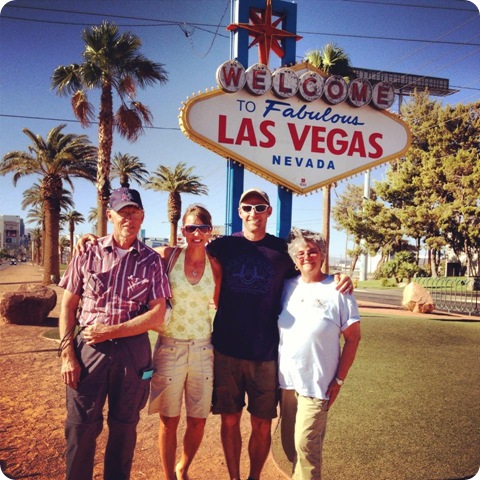 Vegas is crazy, nowadays. Crowds are enormous, traffic on the strip is insane, and traffic lights only change after half an hour.  At least it seems that way when you are watching the temperature in your A creep up while you are sitting there at a light and it is 105.  Here is a little video on the strip.  http://www.flickr.com/photos/rmnly/9042434184/

When we got back to the hotel last night, we found John Jorgensen’s car on the trailer, broken crank pulley.  Good thing we have a trouble trailer, thanks to Joe Davis, who is driving a modern and towing a trailer.  We also have a chase Prius, courtesy of the Wilkinsons.  Did I mention that Bratt’s are back with the group in their modern, they beat us to Vegas.  Pressing on,,,,,,

From Ghost Town to the Most Exciting Town....what a trip!! Glad you made it okay and nice that you could meet Bobby & Jane. Enjoying the trip with you. A & L

How great to have a trouble trailer on the run, that's setting a new standard, congrats to Joe for bringing the trailer. Hope that's the last time it's needed. R&N

So glad you got to hang out with Bobby and Jane!! Fun.

Hey will you guys email me your itinerary/hotels?

Love all your adventures! Fun to see you catching up with Bobby and Jane.

Did ya win big in Vegas? LOL!