June 14, 2015: 24 cars pulled up to the starting line at Oracle Agnews Campus in Santa Clara, CA. We had three lady drivers making the start (Pat was one of them), and 12 lady mechanics. 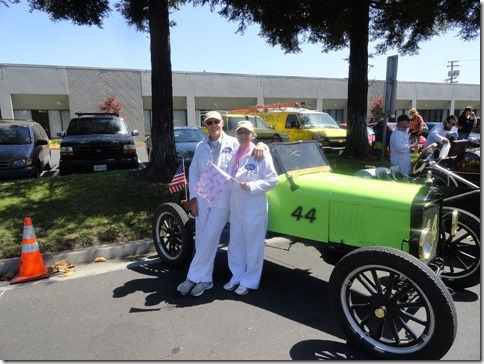 The crowd loved it, especially when some pink flags appeared and were waved. This is always a great part of the Endurance Run, the interaction between the speedsters and the Lowland folk, lots of well-wishing and excitement, the national anthem, and announcing the starting grid. And then, "Gentlemen, and ladies, start your engines." "Is it running? I can't hear it with all the other cars running. I think so, feels like it is vibrating." We're off!!!! 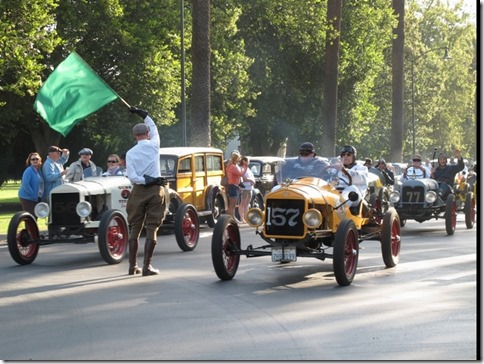 The good thing about starting on an early Sunday morning and using the expressways is the traffic lights are all green. Made for a great drive all the way up Central Expressway to Palo Alto, although we had our first two casualties on that stretch. Glenn's #96 decided to make a little too much noise with a loose piece of bendix flying around inside the hogshead and Dan Gulko had a cracked drum which ate the low band. 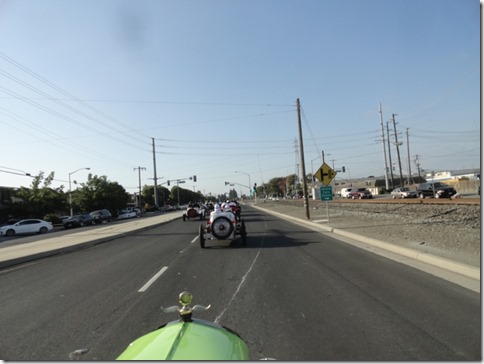 Missed the turn off of Sand Hill onto Manzanita, but managed to signal to the cars behind and they all made the turn. Recovered and got back on track to the first check point at Dick Deluna's mighty fine garage in Woodside. We did spend some time there, lots of fine machines and petroliana for the drivers and mechanics to take in while our T's oiled Dick's driveway.

Times up already??? Okay, back on the road and time to climb. Old LaHonda Road??? Piece of cake, steep??? No problem. Switchbacks??? Crank that baby around. Made it to the top, crossed Skyline in the fog and started down the other side. Holy Cow, I was passed by bicycles on the way down, do you know a bicycle can go around the switchbacks faster than a speedster? That's because they can just lean way over into the turn and the speedster leans way over out of the turn. Exciting times.

We discovered that the coast side of the mountains can be a little COLD. We hit the bottom, took Stage Road to Highway 1 to Tunitas Creek Road. I call it Refrigerator Canyon. I swear you can get frostbite in the middle of the summer on that road. Up and over and down to the lunch stop at Towne Ford in Redwood City. Catered by Harry's Hofbrau, this was a fine lunch. During lunch a little repair work took place, Grover's "Old Yeller" came in on a flatbed and was revived in the parking lot. You can't keep a speedster with a name like that down. 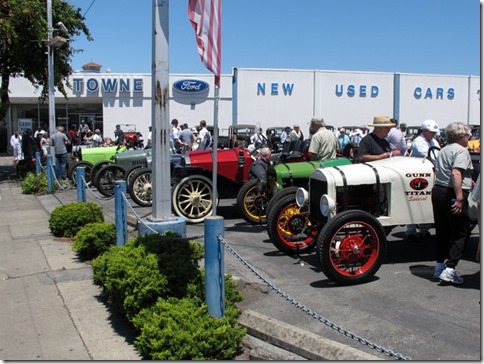 After lunch, back to the hills, the route this time took us up through the Emerald Lakes area of Redwood City. This stretch was like a Laurel and Hardy film, cars coming and going every which way. I have heard tales of a Model T still circling in that area, but that is the stuff of legends and might not be true.

And then, up Kings Mountain Road, remember that one? The switchbacks have switchbacks, full throttle and lean into the uphill side. I had a flashback on one particular switchback that was the scene of a bicycle taking a shortcut across Ed Archer's hood many years ago. At the top, such an easy cruise down Skyline Blvd to the last check point at Skyline Preserve.

This was the home stretch, down Page Mill, assuming you didn't miss the turn at Page Mill, more twists and turns and braking, whew, arms getting tired. Made our way to Central Expressway and headed for the finish. You know what, we have not seen another speedster since we left Skyline, it's getting late, we must be last. Imagine our surprise when we turned onto Laurelwood and found we were the first car in!!! We beat Troed in, we must have totally busted the time. Actually, I think we were the least lost in the group, and,,,,,,,,,,, no milkshake stop this year. 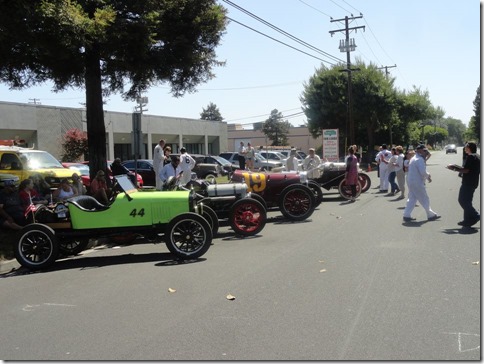 That would have been a deal breaker, because we WON!!! First car in was closest to the official time. Who'd a thunk it? 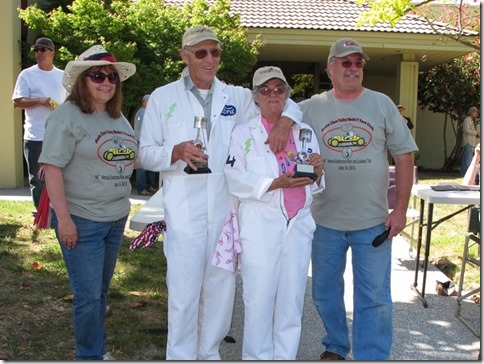 Twenty cars finished, two were really late, (The Bratt girls ran out of gas, and Old Yeller might have been lost for the second time) and two more were lost somewhere in the last half. Larry Harness threw a rod, and we never saw Chris Kent at the finish, possibly still in Emerald Hills.  Pat shared rookie of the year with Noreen Blaze. 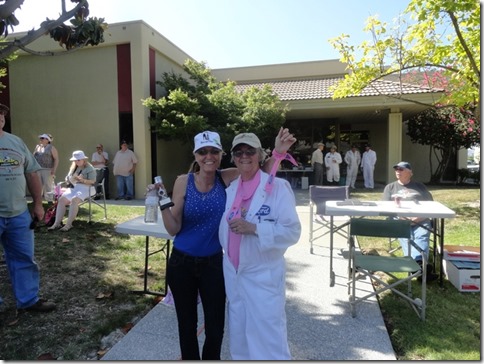 Good route, lot of fun, many thanks to the McKenzies for chairing this one.

So, what’s next?  We leave on Monday, July 6 for Alberta, Canada for a National Tour put on by the Model T Ford Club of America.  We will catch a little bit of the Calgary Stampede and then hit the backroads in Alberta.  Stay tuned,  bob meneely