Sorry to report, Janet has been feeling really punk for a number of days.   Last night, Rich took her to the emergency room in Bend.   She had picked up a nasty bug and they have left the tour and will be returning home.  They will be missed as they were the sparkplugs for our tour.

In the meantime, our traveling band now consists of 3 A's, (Lancaster, Meneely, and Nicholson) and 2 moderns (Christensen and Kafer).  Jones, Griffins, and Richards will see us in Victoria.

The first thing I would like you to do is compare the following picture to the header picture on our blog.   Whattaya think?    Been here before?????     Click on any picture for a larger version. 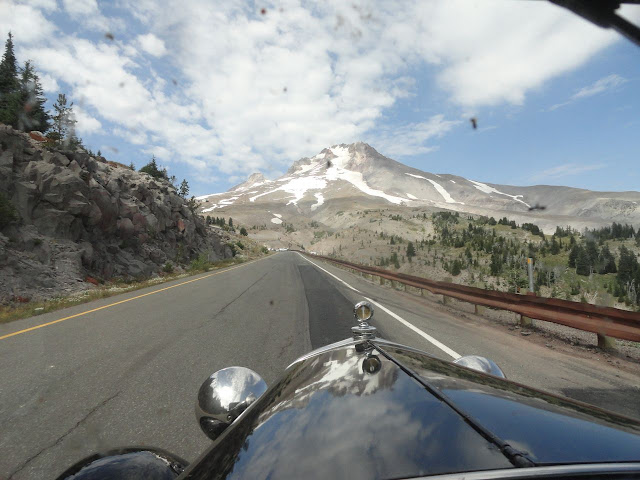 In the parking lot this morning, we spotted this van.  You know what they are selling, don't you?  IT'S WEED CANDIES!!!   I think it is real and not a joke.   As Patti would say, "the world is going to hell in a handbasket." 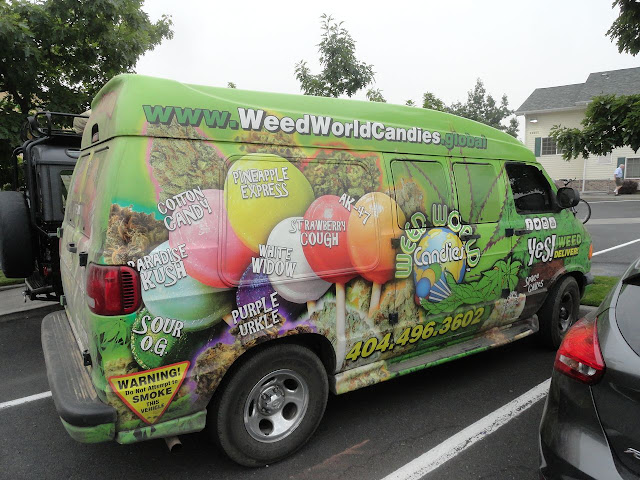 The group headed on North to Madras, OR where we had to stop when we saw this vehicle in a front yard.   When we were on our tour to Calgary in 2001, I was in dire need of a generator.   Ray Fontaine spotted a junker here so we came looking for a generator.  Dave the owner made a call and led us out into the countryside to Dennis Prince, who had already removed the generator from his Model A truck and handed it to me.  I ran it all the way to Calgary and home and mailed it back to him with a tray of dried fruit from Santa Clara Valley.  Dave remembered the incident very well.  I told him that we would be back again in another  15 years. 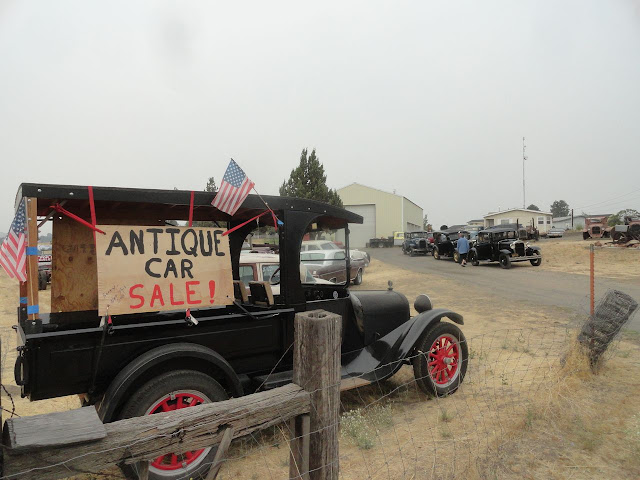 Dave specializes in Dodges, although he tours in a Model A. 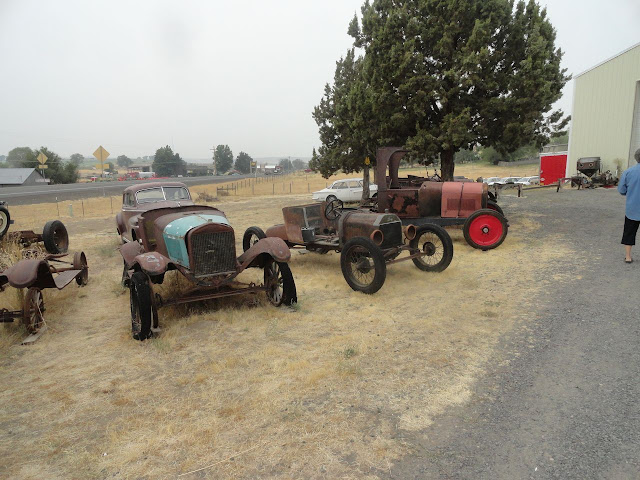 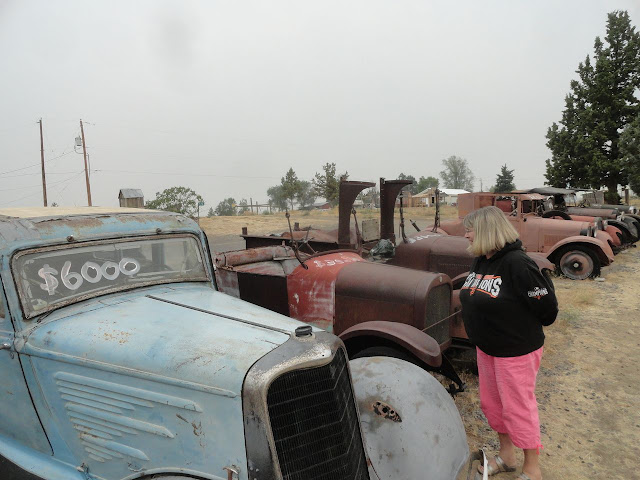 Down the road by the local Ford dealer, I found me a new car, Patti is thrilled.  I think they will throw in the tractor. 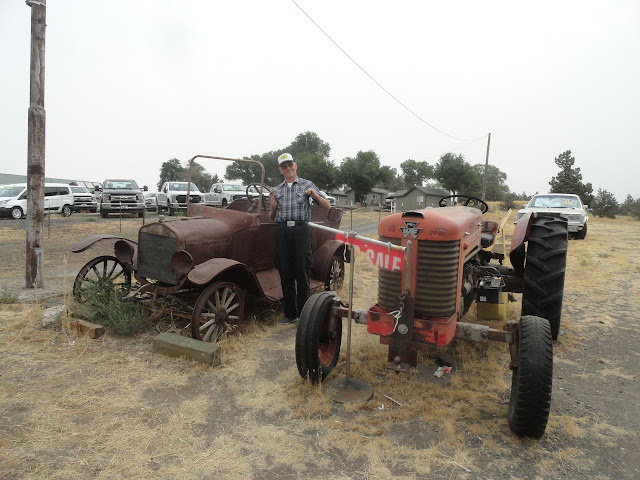 Outside of Madras, stopped to look at several large fields that had been used for the eclipse.  Maybe 1000 acres, all lined off for parking spaces and dozens and dozens of  porta-potties.  See the light colored traffic lanes and the potties in the distance? 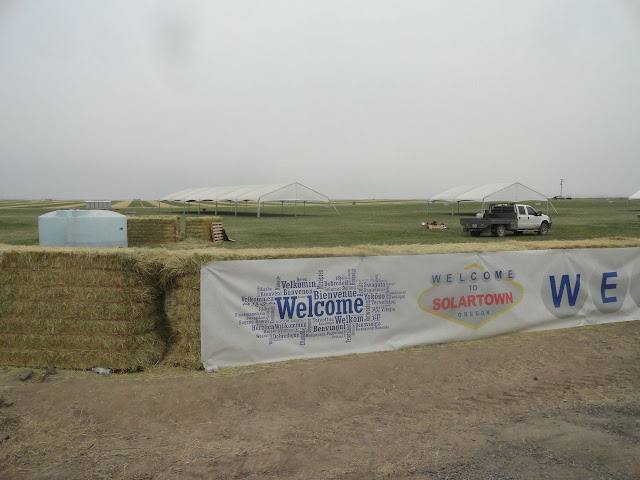 Stopped at an Indian Museum in Warm Springs which is on an Indian Reservation.  Very nice exhibits and tribal history for this area.   Only picture I took was of the entrance. 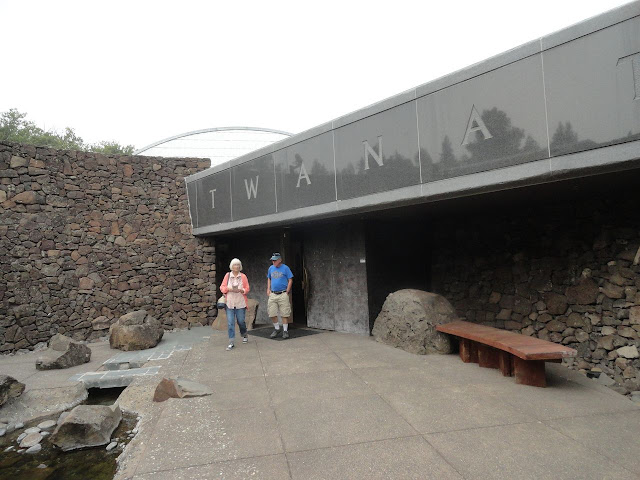 Had lunch at the Timberline Lodge at Mt. Hood.  Very nice buffet, only need one meal today. 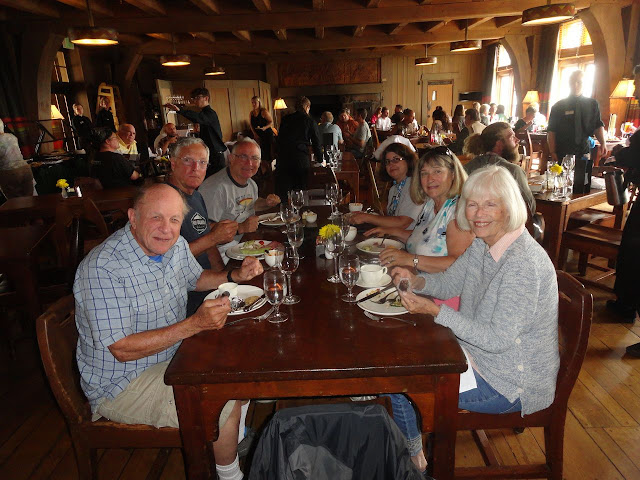 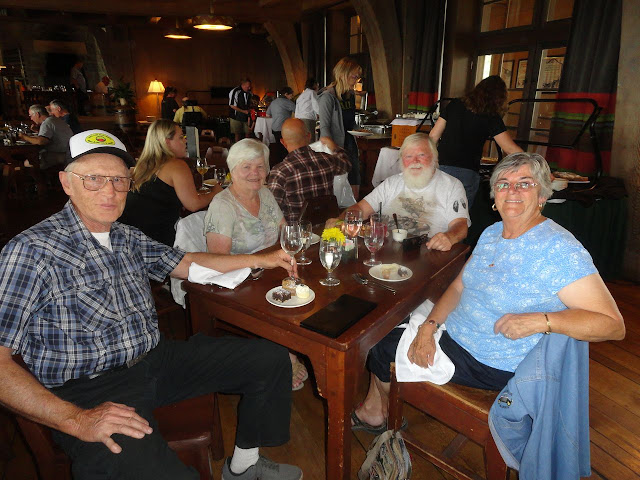 Tonight staying on the bluff above the Columbia River. The little black coupe has been using more water,  did a test putting the overflow tube in a cup of water and sure enough big bubbles when goosing the throttle.   Ummmppfff.   took a shot and torqued the head bolts 65 to 70 ftlb.   The bubbles are gone,  sure hope I don't have to change a head gasket.

Hey Bob, are you trying to tell Ray he missed out on a lot of rust? Must have been a neat farm, car or whatever tour you guys saw. Never worry, your little black coupe will get you home. 😬 :)))
John and Judy