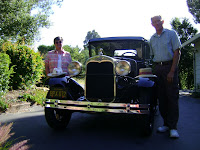 If the car can get up the driveway, we are off. If it can't, one of us will have to get out and push. 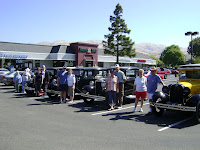 Well, five Model A’s and their occupants took off from the Donut shop in Milpitas at 10 AM this morning. That would be Bob and Mary, Chuck and Helen, Rodger and Noreen, John and Judy, and Bob and Patti traveling to Sacramento. We had Pony Express food packets of beef jerky and hard tack and a Pony Express logo to put on our A windows.

We made a quick pit stop in Livermore and then hit the road again. Bob B. found the first treasure a one inch rubber washer! You never know when you will need an extra part. On the other side of the Altamont Pass we encountered a stiff cross wind at Mountain House Road which started to blow “stuff” out of the yellow pick up, a hat box and a wheel chock 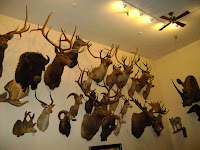 Next stop Foster’s Big Horn restaurant for lunch in Rio Vista (the pictures explain the name.) MMMM good, everyone felt much better after lunch so we pressed on to Sacramento. At 5 we went to the first Pony Express stop for us but actually it was the last stop coming from the East, the Sacramento Station in Old Town Sacramento. Rider Sam Hamilton on April 13 1860 brought the first mail fro 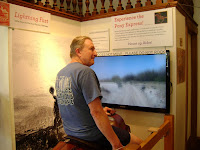 Then on to the kickoff at the California Auto Museum (Towe). We had an excellent BBQ dinner and dessert. Larry Carpenter , a member of the Pony Express Association, gave an excellent talk and showed a video from 1995 with Huell Howser as the narrator regarding the annual re-enactment of the Pony 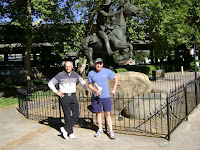 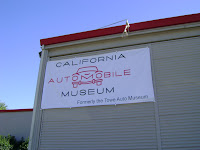 Ride. Larry has been participating since 1995. Those are some tough riders even today.

Tomorrow we are off to Fallon, Nevada with many stops along the way.
Posted by Bob M. at 8:35 AM

So hopefully you made it out of the driveway! Happy and safe travels! Love, The Bernal's (Mary and Bob's kids)

Sounds like a fun first day...Hope tomorrow is a good day for everyone....
Bob & Shirley