(Click on any picture to get a larger version)
Left Eureka at 7:30, 3 passes and one summit later rolled into Ely, NV. Stopped at the train museum and walked all around. Bob B and I met a gentleman who informed us that the repair shops were open, so we informed Mary and Pat that the shops were open and we should go look in. They were only a quarter mile down the tracks. We hiked down there and went in the door, where Bob and I were mesmerized inside this huge building full of machines and locomotives. We looked back and Pat and Mary were standing there with a bewildered look on their faces. "Where are the shops?" B and B, "You are in the shops!" Turned around again and they were gone. Oh well, Bob B. and I had fun climbing on the locomotives. 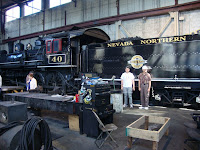 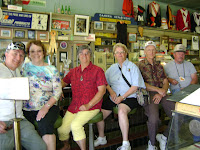 Second stop was McGill, NV, where they have a drugstore museum. Unfortunately, it was pretty early and it was closed. But,,,,, while we were milling around outside getting gas etc., somebody must have phoned the curator and he pulled up alongside John G and said he was opening up. So we got a look at this store which is a time capsule from the 40's, 50's and 60's, soda fountain and all. They have all the prescriptions that were ever filled in this old store, but nothing is currently for sale, it is all artifacts.
Next stop was Schellbourne on highway 93 which is where the pony express route crosses the highway. There is an old dirt road which is the actual old stagecoach route and Pony Express Trail. Had to point the A down that road just to say I drove on the Pony Express Trail. 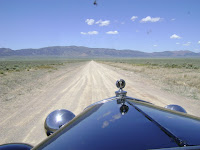 We had lunch at the Lages Junction bar/gas station/motel/pool hall/general store/cafe which is definitely the only game in town. We inquired where the kids go to school, and were informed that they must be driven 18 miles to the school bus stop and then another 50 miles on the bus to Ely. Wow!!

Forged on to Wendover, NV. The two Bobs took a quick trip to the Wendover Air Museum, which is where the Enola Gay was prepared and departed from carrying the first atomic bomb used against Japan in WW2.

Tidbit for the day: Bob B got locked behind the gate at the Pony Express Stop, got locked in the sauna at the motel (and Patti was nowhere around) and knocked on the wrong door trying to find us. Seems to be having a problem with doors and gates.
Posted by Bob M. at 9:44 PM

Hi Guys. WOW another busy busy day. Mary better put a leash on Bob. We were talking about you all at the seminar today.(it was a fun time)several said they were reading about your adventures.How are the gas prices and weather? It,s been a little cool here in the evening.Have another good day and be safe.
Shirley & Bob

What a great travelogue! And now movies, too? Oy!
John & Judy

Sound like you are having fun. Could you have taken the Pony Express route further. Nothing like a dirt road to make traveling in an A sooooo much fun !!!! Wish we were there, Safe travels

Sounds like a great trip. All is well on the home front. Daniel is working in the yard. Birds and fish are all fed.
We are really enjoying reading your journal; keep it up!

It sounds like you all are having sooo much fun!! I can't believe you actually saw pelicans in Utah!!?? We sure look forward to hearing more about your travels each night. See you in a few days!
Chris and Sharon