(Click on any picture for a larger version)
Since it was pretty warm yesterday afternoon, we bailed out of Wendover at 7 AM this morning and made tracks across the salt flats. Oh, bye the way, message to Ray Fontaine, our arrow that we made when we went to Indiana is gone from the salt flats. Winds were weird, first blowing from the left and then blowing from the right. Somewhere out there we lost one of our magnetic Pony Express stick-ons so when we stopped, we took the other one off, cause we sure want to keep one for a souvenir. The salt is very tempting looking to drive out on except you can see tracks where folks have tried that. Some tracks go out and back and some tracks end in big ruts. Those are the ones that tell you not to do it. We pressed hard and didn't stop until we got all the way to Saltair (the big old building with minarets) on the edge of the lake. Anyway, at the Saltair, walked out a few feet on the salt, just to say we did it, it was definitely squishy. The water was way out today, seems to depend on which way the wind blows, the gal in the gift shop told us that last Wed the water was up to the back door. 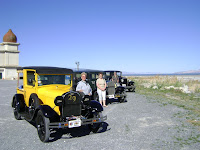 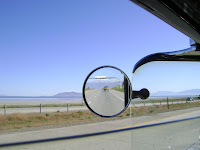 Our second stop of the day was at the Pony Express Monument in Heritage Park in Salt Lake City. As early as we left and as hard as we pushed we were not the first Model A's to arrive there. The monument has a big bronze statue and a replica of a typical Utah Pony Express station, which was used just for changing horses. The replica was built for display at the 2002 Olympics in SLC and the logs and lumber came from an old 19th century barn. After the Olympics, it was moved to Heritage Park and now sits within a few hundred yards of the original PX route. Not much for creature comforts, just four walls and a roof, about ten foot square, no windows except for a gun slit in the back. There was also a very small corral in the back that faced the gun slit. 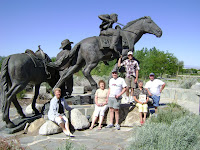 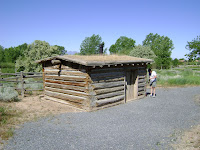 Saw one more marker in Henefer, UT and then pressed on to Evanston,WY. After recharging a little, went out in search of the visitor center. After driving up and down the freeway a couple times, we finally found it in Bear River Park. The nice older lady inside the visitor center fixed us up with lots of WY maps and pamphlets and historical facts and even demonstrated the use of a freight wagon hub wrench. The park has a small herd of bison and there were six new babies. The little bison are really cute and the adult bison are really rather menacing looking. Bob B. was really wanting a buffalo chip but we dissuaded him since the bison compound has lots of signs that say "bison are dangerous" and a double fence (electrified) all around so folks like us can't reach in. The park also had three elk in velvet. Inside the visitor center they have a big pile of elk horns that have been shed by their elk, and I didn't take a picture of them. (Duhhh) 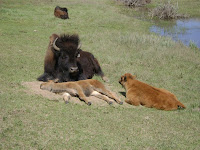 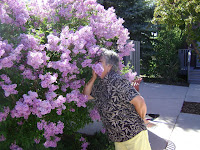 And here is a picture of Patti celebrating her anniversary today.

Awesome stories and pictures!! I just got all caught up and read all of the posts (we were running like mad in Chicago and didn't have a spare minute to get online).

Happy Fathers Day Bob & Bob...And Happy 46th Anniversary Bob and Patti.WOW thats a LONG time. Once again the pictures are great. I love those lavender flowers. Dave and Susan have their A back on the road. Dave is very happy about that.Have a great Monday and keep safe.Hi to all.....
Bob & Shirley

Wow Happy 46th to you and Bob. Taht is great. Such great time you guys must have thought you were on the Salt going for a land speed record ! Safe travels enjoy reading the blog as always.

Will and Karla Lancaster

Looks like Fun.
I just got caught up on the posts too, cuz we were camping for the weekend.

Maybe you better stay out of small rooms with locks on the doors for a while....tee hee