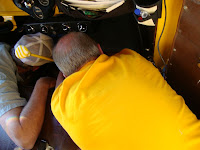 First thing we did today was stick our heads in John's bellhousing to check on the throwout bearing.  Looked fine so we closed it back up.  Departed Sac at 7:40 with 5 cars in a group. As we left, one driver named Bob mentioned that Vintage Ford was nearby and did anyone need any parts. Another driver named Bob, whined until we stopped. They were closed unfortunately, but it was a definite photo op. 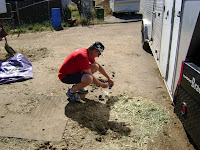 We drove right by the first Pony Express stop without seeing it, so we stopped at the Rescue Fire Station for some local assistance, and after first inquiring about their facilities, discovered that we had to backtrack a few miles. It was well worth it, hidden behind a bunch of horse trailers was an original Pony Express Barn and Station House, which is now part of a local ranch, still there and occupied. It was here that another driver named Bob found what he claimed to be original Pony Express road apples. We are now carrying some of them with us.
The gal at the fire station also directed us to the five mile house station marker, which was reduced to a pile of rubble because a car had hit it. She went across the street to the little restaurant to see if the owner would bring it out for us to see, but he declined, said it was too heavy, so we settled for a look at the rubble.  Then consulted with the guidebook to find the next marker. 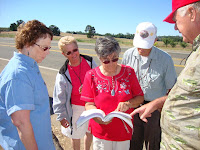 Then saw Placerville Pony Express Station marker in downtown Placerville, before heading up to Apple Hill for our usual stop (when on the way to Tahoe) at Boa Vista Orchards for apple dumpling, strudel and cider.  Next stop was Sportsmans Hal and the Sportsman Hall Pony Express Marker.  The Hall is now a restaurant but we were too full for lunch. Passed a store called Pony Expresso (such blatant commercialism). Strawberry Pony Express station was named after a man named Berry who fed his clients horses straw instead of hay, hence the name Straw Berry.   And over the hill to Tahoe we went. Wildflowers and snow.   Little off-roading shot here, turning around with a Borg Warner overdrive is interesting sometimes. 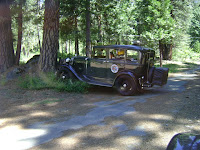 Still too full for lunch, up the Kingsbury Grade and down the other side we went. Kudos to Lauren A. for driving the Grade up and down very skillfully.


Lunch stop was in Genoa at the Mormon Station Pony Express stop and a local mom and pop deli. Good sandwiches! Then we checked out the oldest saloon in NV. There were a few bikes out front, we were very careful not to knock them over.   There was a new outhouse out back, definitely required a picture of the lineup in front. 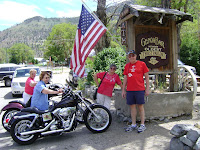 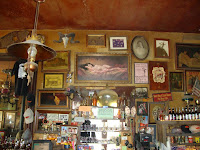 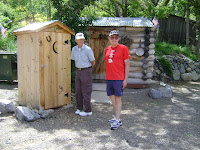 Passing thru Dayton, Bob B stopped to visit with an old work buddy who moved to the desert. From here, the weary group hightailed it to Fallon, the destination for the day.
Posted by Bob M. at 9:40 PM

Looks like you all had a full day of fun and to top it off APPLE DUMPLINGS TOO. Sounds so good. Hi to everyone and hope your tomorrow is a good one....
Bob & Shirley

Are all the men on this trip named Bob? Sounds as if you are having a great time, made easier by not having to remember any other name but Bob.

It seems like you always stop in Fallon! How come nobody ever stopped there when I lived there and Model 'A's were new!!!?

All is well on Duval! Yes, the sprinkler system is working fine.

sounds like a great trip. And maybe some discoveries not on the offical guidlines? Know apple hill is known for the pies and dumlings can wait till Sept for that. WISH we were traveling with you.