(click on any picture to see the larger version.)
Cars went in all directions today. Beamans headed NW for Jackson Hole and Yellowstone. Christensens headed back west retracing the trip east. Meneelys and Guzzettas headed south on Wyoming 487 and 287 for Rocky Mtn Natl Park, and were accompanied by Pelikans.  Lots of animals out there amongst the grazing cattle, saw hundreds and hundreds of antelope, lots of prarie dogs, one fox, 2 deer,3 elk and 2 llamas(?). Major windfarm constructions are going on out there on these windy plains. Wyoming is very very green and has quite a few wildflowers. There are lots of natural waterholes, and they must be full of mosquitos, because we began to do a mosquito study as we went along. We have scientifically determined that the center of the windshield is practically mosquito free and but as you go towards the sides, the mosquito splats get more and more close together.  You can see that in the photo of the road taken through the windshield.
Notice the mosquitos in the left picture?                  Stopped for roadwork on the right. 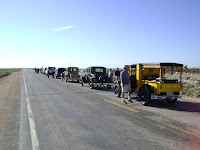 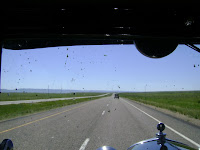 We stopped in Medicine Bow, population 274 for gasoline (high priced) and breakfast (very reasonable) at the Victorian Hotel which was an imposing structure and the only structure in town that would not blow away in a big wind. The servings were enormous, pancakes hanging over the edges of a dinner plate. We met 6 prairie dog hunters from Alabama, they asked about the Model A's and we asked about prairie dog hunting. "What do you do with a prarie dog." "Let them lie, we can shoot 50 or 60 of them and overnight they just disappear." Amazing what some folks do for fun and how far they are willing to travel to do it. 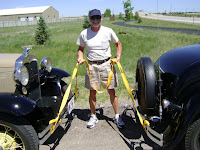 As we approached Laramie, and saw a couple dear amongst the antelope, and the range was really green and not a cloud in the sky, we had the thought that we must be home, home on the range, where the deer and the antelope play, where never is heard a discouraging word and the skies are not cloudy all day. Shortly after that, as we were leaving Laramie, the Pelikans car stopped going forward. No connection between the engine and the rear wheels,and from the noises made when the clutch pedal was pushed in and out, sounds like the clutch disc center is spinning freely. Chris produced what is known in Colorado as an H strap. This amazing little device allows you to quickly hook the bumpers of two A's together for a short tow. Basically loops over the bumper ends of both cars with a strap between, no metal hooks to go flying, takes about 15 seconds to hook up and away you go. We towed Chris about a mile back to Laramie and into a little park. A quick check of the GPS showed that they were only 117 miles from home and within Triple A Plus range so Millie (the A) went home on a flatbed and Sharon went home in an air conditioned cab. Chris noted that they would get home and get a modern and join us in Estes Park as originally planned and commented that that was the mark of a real Model A driver. I remarked that a real Model A driver would go home and borrow a real Model A to resume the trip.

I am quite amazed at the performance of the A. Today we were at 7000 ft altitude and we could cruise at 55 in overdrive on the flat, course we dropped to 45 on most hills. Got a phone call from Beamans, they were in Jackson Hole at 1:30.

Here are a couple more pics: Entering the canyon to Estes Park, prairie dogs (aren't they cute little varmints?), and on the steps of the Stanley Hotel in Estes, built way back by the same Stanley of steamer fame. 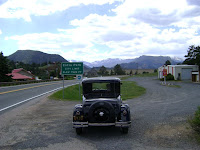 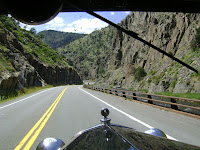 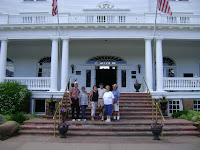 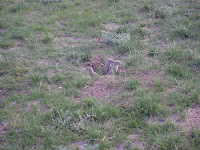 So beautiful in Estes Park (was there 11 years ago). Love reading about the great adventures you're all having each day!!! Thanks for the stories and photos.

I think that a REAL Model A'er would have towed them all the way! Terrific scenery in Estes Park, especially the drive up the hill and looking back down into the valley, enjoy.
RG

Chris promised there would be no climbing today, but there was that 12,000 foot one and then a few more almost as high. We don't climb so good...so no more climbing, OK?
John and Judy