Okay, homeward bound, Salina to Eureka, no tourist stops, we are ready to be home, and the cars are ready to be home. Pat says it is time to be home when your maps are in pieces. Between Salina and Eureka, we climbed six summits and three passes, the highest being 7732 ft. Don't know what the difference is between a summit and a pass, the Model A works just as hard on either. After yesterdays experience, we are really gun shy about gasoline, we stopped in every town. We never got below a half tank. 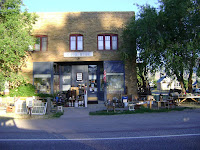 Went past my favorite store in Scipio, one of these days we are going to catch it open. 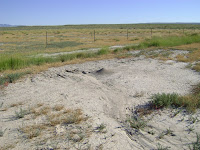 Not much to look at today. West of Delta, which is incredibly desolate, we began to notice these little mounds along the road. We finally figured out they were anthills. Each hill was about 9 to 12 inches high, about 18 inches in diameter and stood in the middle of a 10 ft bare plot of ground. We finally had to stop and take a picture of one of them. Turns out they were red ants, probably maneaters. And mosquitos found us, we must have been 20 miles from the nearest water, how do they do that? Only other thing worth looking at were a couple of 24 ft wide dump beds for the giant trucks that they use in the open pit gold mines. 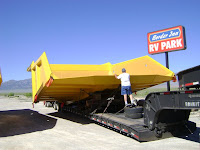 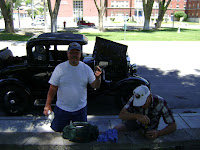 Both cars did fine today until we got to Ely, then believe it or not, my carburetor float sank. Car began to sputter and we were leaving a trail of gasoline, so we ducked into a city park and pulled the carb one more time and changed the float. Rest of day was uneventful. This evening I began to worry that I no longer had a backup float, so applied some JB weld and a patch made out of a piece of Bud Light Lime beer can, who knows this might even work in a pinch. And then John rummaged around in his parts box and came up with a Zenith carburetor, so John is carrying a spare for me, but it dooesn't fit on his truck which uses a Weber. Mighty nice of him, I say.  What else you got in that box, John? 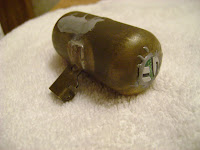 Oh Bob, we'd carry a whole load of parts for you....
What are traveling buddies for?
J and J

It was nice hearing your voice today. You did sound like you were ready to be home. It was really HOT here today. Its going to start cooling down a bit tomorrow. Have a good Monday. Be safe.
Shirley

Hi Bib and Crabbie,
We are here in Twin Falls--Sounds like you need to carrie a spare gas can--I got Bill Alley to cary one for our group.I hear that it is hot in the Valley--101-102??We are having a great time but having trouble getting started in the morns.We did not leave Jackson intill around 11 today-got into Twin Falls at 8:12 P.M.When do you get home?For us we will be at Battle Mt Monday-Minden Tuesday-& Home on Wednesday--Not sure when we will depart on Wednesday but I`m thinking should be on our way over 88 by 5:00 A.M.
We have been getting lots of "Hits" on our SVMARC.Com blog--Lauren has been doing a great job and we are having a great time!!
Be safe,Bill Rose & Alleys

Hi, Bob and Patti.
It sure appears that you're having a great trip in spite of the car problems. The pictures are really good. That is certainly beautiful country. We sure enjoy reading about your trip.

That was a great emergency fix on the carb float. It reminds me of the time that a friend and I drove a tractor home with ignition breaker points repaired with a piece of Prince Albert tobacco can. We had to fix it or walk home. Solutions can be found when one is stranded.

Good luck on the rest of the trip home. May you have a good tailwind most of the time.

Will Ed and Linda in Texas

A piece of a bud light can!!! You guys crack me up. Safe travels on the way home.