(Click on any piture to get a larger version) 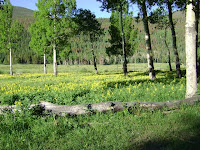 We awoke to a view out of our window of a beautiful smooth, clear lake in Estes Park. It was spectacular. Checked out at 7 and followed Chris and Sharon to Alluvial Falls. Bob took off stomping through the bushes to get some wild flower pictures. All of a sudden there was some movement beside him. It was a lady dressed in camouflage complete with a camera and huge lens all wrapped in camouflage. She was focused on the woods across the meadow waiting for a shot of a bighorn or elk. Don’t think she was happy when bigfoot came stomping up beside her. 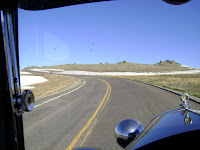 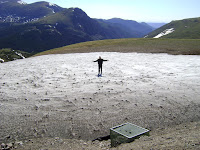 Heading for the sky,,
found snow... 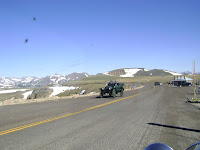 We said our good byes to the Pelikans and wished them safe flying (that’s a Patti pun). John & Judy, Bob & Patti headed west which in Rocky Mountain Park means UP, big UP!! Not much high gear was used in this climb. Just as we reached the top, we met some antique touring cars coming the other way. We snapped pictures on the fly of them and they snapped pictures on the fly of us. One of the cars stopped at the visitor center at the top to refill his radiator, so we asked where they were from. Turns out, it was a group of 13 guys who get together every two years and take a 2500 mile tour in their pre-1914 automobiles. The ones that we saw were a Locomobile, a Peerless, a Pierce Arrow, a Lohr, a Cadillac, and a Stanley Steamer. 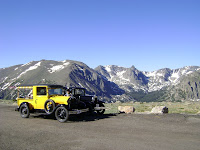 The highest point on the road through the park was 12,183 feet! No wonder we were huffing a bit and no wonder we are in second gear. At the visitor center we saw a yellow bellied marmot, Gus. Apparently the staff are fond of Gus and his family of young ones. Marmots in Estes Park hibernate from mid August to May 1. During hibernation their heart rate slows to 2 beats per minute and their body temperature drops to 34 degrees.
Crossed the Continental Divide again at Milner Pass elevation 10,759 feet. Saw a herd of 25 – 30 elk with the babies gamboling through the tall grasses. At Granby Lake we saw lots of white pelicans. How do they find these lakes so far from the ocean? 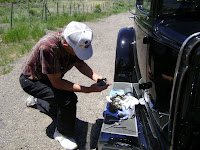 About 4 miles before the small town of Wolcott at the top of a very long climb, we started smelling gasoline rather strongly so Bob decided to have a road side seminar on carburetors. He had to use rags to touch the bolts because they were so hot. Took out one carb and put in another he had under the seat in about five minutes, yea. Not so fast it didn’t work. I think he took it out and in about 3 or 4 times, just wouldn’t work. Finally, took the original carb’s float valve off and blew it out good. Seems to be okay again. On to Glenwood Springs, CO for the night, all of a sudden we have entered hot country, high 90’s in Glenwood Springs.  Had a touch of vapor lock, so wrapped my gas line for tomorrow.
Last two pictures:  A big ark-shaped building in Estes Park, are we expecting a new flood?  And a shot of Glenwood Canyon from I70. 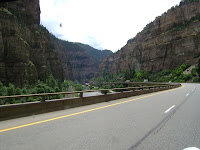 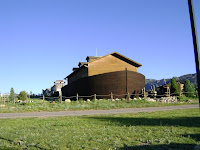 Sounds like another great day traveling. We also saw lots of animals today, even a black bear. Yellowstone still shows a lot of the damage from the 1985 fire, so it was a little sad. Still had a great day. Heading for Elko tomorrow and westward from there.
See you when we get home.

Hello.. The blue skies sure look nice. We are expecting to get in the 90's this weekend...So your homeward bound, are you ready? I.m sure the girls are really missing you and Bob.Have a good day, see you soon.
Bob & Shirley

Looks fun!! Ro and Ree were fascinated by the snow picture.

Keep on keeping on,
M

It's about time you headed west. Seems as if you've been gone at least a year. Safe travels. Miss you.
Janet