(Click on any picture to see a larger version)

We departed a little later than usual today because our first stop (at Fort Bridger) was only 30 miles away from Evanston and did not open until 9 o'clock. Fort Bridger originated as a trading post founded by Jim Bridger, later became an army fort, then a stage stop, then a stop on the wagon train routes, then a pony express relay station and finally a stop on the Lincoln Highway. Lots of restored buildings and contents. The gentleman in the mercantile played the part of an 1850 shop keeper very well, he knew his merchandise but we surprised him with a little knowledge of our own at the risk of being dated. We checked out the livery and found a rather large beartrap of very unusual design. We tried to open it but had to be satisfied with the enclosed picture. And right next to it, was an orange and black restored 1930's motor court, rooms for a dollar, pull-in garage included. Even had electric light powered by an antique Delco generator. Everythings up to date in Fort Bridger. 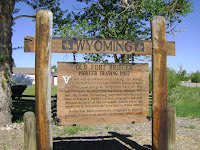 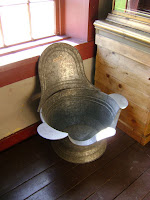 The mercantile had this sit-tub for bathing.
Can you imagine using that?

We had to rescue Bob B from this giant beartrap. 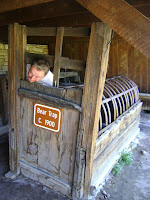 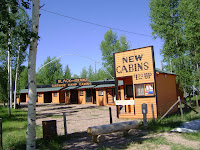 And these were the 1930's
tourist cabins.

Second stop was at Little America for a 50 cent ice cream cone, now that certainly drags in all the Model A drivers. And you know we all came out with more than just ice cream cones. So the come-on advertised on the roadside billbords really works.


Took the 2 lane roads to the NE, Wyoming routes 374, 372 and 28. First interesting stop on this route was at the Mormon Ferry across the Green River. There is an actual replica of the original ferry parked up on the bank, too bad, would have made a good Model A picture if we could have used it. Getting across this river was very risky business for the wagon trains. The enterprising Mormons put in the ferry and charged $5 per wagon which was a very dear price. Some folks elected to cross on their own and many wagons and people were lost in the waters. Our group collected souvenir rocks as our A's are a little too fast on the hills. Mary B collected mosquito bites, sacrificing to protect the rest of us. 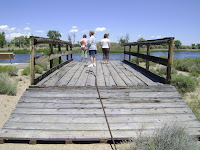 On the ferry.
Halfway to Lander, we came to an actual crossroads at the village? of Farson. Big enough to have one gas station and one mercantile store/cafe. All the Model A's stopped here to refuel. FYI, Gas prices have been ranging from $2.75 to $3.49.
Moving onward, we crossed the Continental Divide at 7550 ft. Two adventurous souls decided to take a dirt road to the restored gold mining town of South Pass City which now boasts of a population of about 7. This town had a very shortlived gold boom and at one time was the 2nd largest city in Wyoming having a population of 3000 at that time. Today the old ghost town is partially restored. It turned out to be very interesting and we spent way too much time there, as a result, did not get in to Lander until 5 o'clock.

Dirt road in.  These cows are watching the traffic. 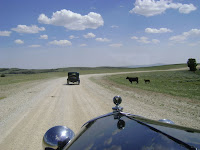 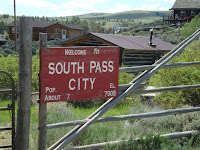 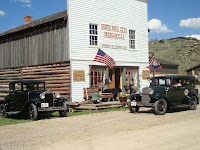 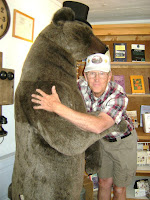 Bob M gets a bear hug. 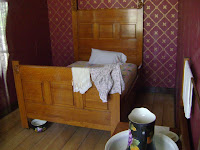 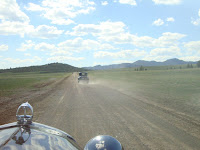 Old time Hotel room
can you spot the
chamber pot?


Dirt road out.
After dinner, we spotted Bill Rose and Alleys just pulling in. Bill has a problem with his air conditioning bracket which has broken all four ears which hold the compressor. The car is still going but the compressor is hanging off the alternator and the alternator pulley is rubbing and the compressor belt is rubbing. Bunch of guys all stuck their heads in and tried to figure out a simple fix, not easy. So any of you guys that have AC, you better inspect your mounting bracket, this seems to be a very common failure. 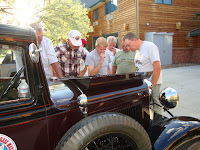 Hi Guys.. Glad to hear that all is well . today the first day of summer was perfect here. Looks
like you all had another busy day. Sorry to hear that Bill R is not feeling well, and his air is a problem. Nedra and I are going to Bingo tomorrow.Wish us luck.Take care.
Bob & Shirley

Hi travelers, Nice reporting, we're enjoying your travels, but wish we could have kept going with you beyond Tahoe. Sounds like the cars are performing well, Bill's can probably be repaired in Casper.

Thanks for taking us along in spirit and enjoy your mid-point days.
RG

so you finally found some Model a roads. aka DIRT. looks like fun. Sorry about BR's problems. I noticed in the picture of South Park City. Was that a satilite dish in the background???? Have fun enjoy the rest of your trip. See ya when you get back.