We are all ready to be home. How can you tell that? We agreed to leave at 6:00 AM, and at 5:30 we were all loaded and out in the parking lot, so we left at 5:30, pedal to the metal, heading for Tahoe, 300 miles, our destination for today. Every morning when we hit the road, we go through this little exercise where we have all the windows rolled up because it is chilly, so in the absence of wind noise, we get the full benefit of the miscellaneous engine noises. Is that a new one? I don't remember that sound. This usually goes on for about 10 miles as we slowly increase speed and build up the wind noise. And as the day wears on, by two o'clock, sailing along with all the windows open, we don't give a damn how much noise the engine is making.

It took four summits and one pass to get here. John had one more flat tire out by the Fallon Naval Air Station, he is now out of spares. But we are forging on, we still have one spare between us (mine) so we won't start serious worrying until we have another flat. As we came west, it began to heat up, and as we came through Carson City, the outside air temperature climbed up to 98 degrees. We elected to go over Spooner Summit, a daring decision, considering the lack of places to pull off. It was a ten mile grind. I flirted with vapor lock, periodically burping for the first two thirds of the climb in second over and second, and finally the outside air temperature had gone down enough that the engine smoothed out for the last third. I know Patti was really nervous cause she didn't say anything all the way up. Anyway, tonight I put John's Zenith carb on for the run home, both my float valves are just weeping too much fuel and screwing up the mixture. We spent the evening sitting on the deck at our cabin, recharging for tomorrows charge to the finish. John is happier tonight, because unlike last night, we have kleenex, coffee pot, continental breakfast,and a shower that works, but no room key, ce la vie.

We are really looking for one day without any mechanical adventure.

Here is what you do when you are bored. 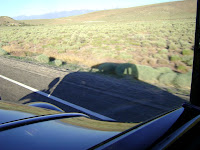 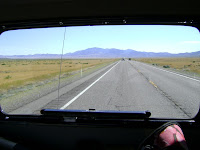 This is John making a pass, the only one of the trip. 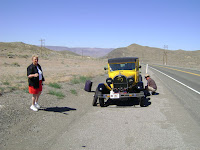 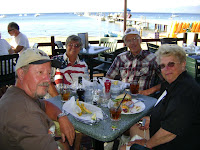 A leisurely lakeside dinner.
Posted by Bob M. at 8:44 PM

Well your not far from home now. We had another hot day today. It should start to cool down for you guys. Talk to you soon. Be safe.
Shirley

As always, the views of Lake Tahoe are marvelous. Bet you are glad to be back in God's country. Have a safe drive home. Missed you.

Hi Guys,
Hope you make it home without further incidents. The hiway (80) from Sacto to 680 and most of 680 in the slow lane are HORRIBLE. Spent the whole trip from Sacto dodging 3 foot dia potholes and broken pavement and speeding trucks. Take the slow route, you'll thank us later. We made it the whole trip with no mechanical problems except a tire change for good measure. My tomatoes grew to 4 feet while we were gone. They were only 1 foot when we left. Good to be home...call later-
-Bob & Mary

Hey guys-
Maybe you should do one more loop on the Pony express cuz we sure like reading the updates. What are we going to do now that your home.

The Beacon looked nice. Did the racoon come out from below the deck and visit you?