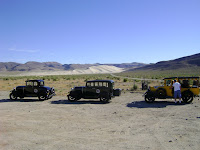 day 3;  190 miles from Fallon to Eureka, NV. (Left click on any picture to see the larger version.)  On the road at 7:30, first stop was at the big sand dunes for a photo op, and this was also the location of the Sand Springs Pony Express Station. Sadly, the historical marker, and the loneliest phone booth and the loneliest road sign have all been stolen. But it still makes a great picture.


Next stop was Middlegate Pony Express Station, which is now a gas station (one pump, one octane) minimart motel cafe bar out in the middle of nowhere, on the original Lincoln Highway, 50 miles to the nearest town. The ladies found some really neat Pony Express T-shirts. Tourists have plastered the ceiling with dollar bills with their names on them. 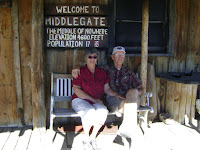 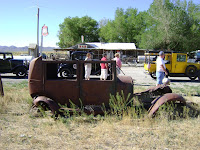 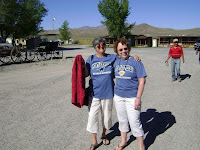 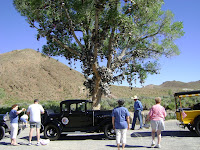 A few miles down the road on the left is the famous shoe tree. Since we last came through here, the number of shoes has increased by tenfold. And being true philanthropists, we all gave up a pair of shoes.

Stopped at one more Pony Express ruins, pressed on and then stopped for lunch in Austin. The folks there mentioned that they had snow yesterday!! We went into an antique shop, Patti spied a chest made out of old Coca Cola cases, Bob offered to buy it on the way back, and our supposedly friends all started chanting, get the box, get the box. We got the box and then tried to figure out how to get it in the car. Had to stuff some of the other stuff inside the box, but we got the box. Had to include this picture of two dogs in a pickup, in NV a dog only has to be 3 years of age to drive. Freshly fueled, we hightailed it with a great tailwind into Eureka, NV. The cloud shadows on the road were doing about 50 mph going east, fortunately. We got in about 2 o'clock, an early day for us, so we went exploring in the town. We found a pamphlet for a walking tour so we hoofed around and checked out the Opera House, the museum and the courthouse. Eureka is a really neat little town, with many restored buildings, if you drive through here, don't fail to stop. 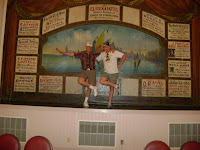 Here are a few pictures from Eureka, the opera house with a couple shady characters up on stage, a 5 seat outhouse made for the WPA back in the 30's, and the interior of the local market, which definitely had a little bit of everything. 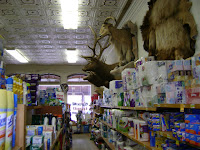 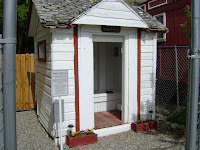 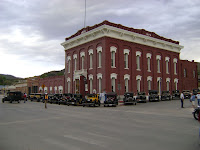 MAFCA arranged for the local Lions Club to furnish a BBQ steak dinner at the fairgrounds, mighty good food, stuffed ourselves again. And then we took all the Model A's downtown, the local sheriff blocked off the main street and we parked all the A's around the courthouse for a group photo op. Think that wasn't enough? Walked uptown for ice cream.......
Funny story for the day. Bob B. and Pat happened to see the spa room, and it had a sign on the door that said, "Don't close the door, because you will be locked in." Pat talked Bob B into testing to see if that was really true. "You go in and if you can't get out, I will let you out from the outside." So he went in and closed the door. Sure enough, he was locked in, so he asked Pat to let him out. Guess what, the door could not be opened from either side. So Pat went and got the desk clerk who had a key that she said sometimes did not work. She was right, Bob offered to climb out the window, but after a couple minutes of jiggling, the door opened. Of course then the clerk could not get the key out of the door. Moral, don't let these two out together, there will be trouble.
For the record, today we topped 1 pass and 5 summits, the highest summit was Austin Summit at 7484 ft.
Posted by Bob M. at 9:56 PM

Wow another great day.. Those two hunks at the Opera house look HOT!!!!!!!!!!!!Great pictures thanks for sharing.Hi to all.
Bob & Shirley

It seems food is an important part of your journey! Marlayna

Sure looks like you guys are having fun! Mary and Pat - cute shirts! Bob and Chief Bob - cute legs but don't quit your day job. Your going in the wrong direction for Dancing With the Stars :)
Pete and Marilyn SLO