Great day for a drive, cool morning, bright blue skies, we pushed off at 7:30 for Casper, Wy. Bob M had to take a little downtown tour of Evanston just to say we did it, and then we headed out. I must say that Wyoming is incredibly green this summer, all the little streams are running full, and there are lots of wildflowers here and there. Also must note that the wind is always blowing. I think that it hasn't stopped blowing since I first traveled through Wy back in 1956.

We hit a stretch of highway that had been tarred and seeded not too long ago. We had not been paying much attention to the road, just sailing along fat dumb and happy enjoying the scenery until we met a truck coming in the opposite direction and we got a nasty chip in the windshield from a flying stone. Being now alerted, we tried to minimize further damage by hugging the right shoulder whenever a car or truck passed us. Even then we cringed at every vehicle, listening to the stones hitting our fenders and left side. Fortunately, this stretch was only about 5 miles long, but we have lots of new paint chips. 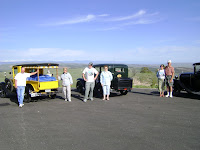 We stopped at the Wind River Mountain and Beaver Valley Overlook for a photo op and met a BLM employee who fixed us up with some BLM maps and took a group photo for us. The Oregon Trail and the Pony Express locations are well known and shown on the BLM maps and you can actually drive on a lot of it, although it is all dirt road and some is two lane track. As we talked, we asked about grazing rights and who owned the land etc. The BLM allows one cow per 50 acres and leases land to oldtime local ranchers for $3 per head per year. By todays standards, that is pretty cheap,and some of the ranchers turn around and sublease it for $10 for an easy profit. Gotta love this capitalistic society. 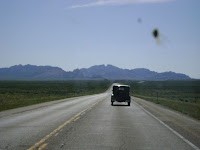 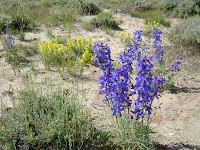 As we pressed on East, we began to notice this distant range with a notch in it. As we got closer, we realized that it was the Split Rock landmark. We stopped at the Split Rock Overlook because Oregon Trail ruts are supposed to be visible there. As we left the parking lot, we instantly became mosquito bait, they must have heard that some juicy Californians were coming. Needless to say this was a quick look, never could pick out the Oregon Trail but did see some mighty pretty wildflowers.
We stopped at the Mormon Handcart Museum and absorbed a little Mormon history. A lot of the items in the museum were items that were abandoned along the Oregon Trail as the travelers pushed west and struggled to lighten their wagons and handcarts. It was here that one of the guides pointed out a section of the Oregon/Pony Express trail that we could drive on for a mile or so. Got a good video on that one.
Click here to see it: Driving on the Oregon/PX Trail 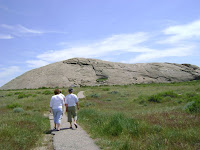 Next stop was Independence Rock, a landmark used by the wagon trains going west. Two energetic Model A drivers named Bob decided to climb ot the top of Independence Rock. This made the ladies very nervous because unbeknownst to the climbers, there were 4 buzzards circling them. It was worth the climb as the 360 view at the top was spectacular and we discovered some of the old names and dates scratched on the rock by the pioneers pushing west. 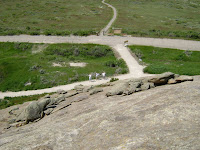 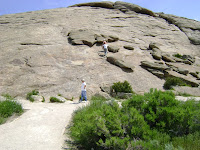 Small specks down there.

We had a fantastic 360 degree view. Click here. 360 View from Independence Rock
And found some of the old markings up on top of the rock. 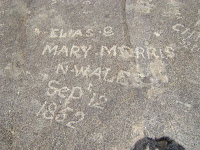 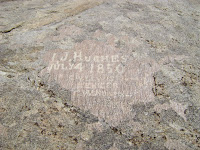 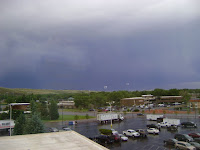 Arrived in Casper and we have had a moderately exciting evening. Late in the afternoon, we heard sirens going off all over town. The hotel workers said it was a tornado warning. I must admit the sky was pretty black. Pretty soon the announcement was made in the lobby that a major hailstorm was eminent and we could take the Model A's to the Casper Event Center and get them under cover. Lots of folks scrambled to do this, as it was beginning to rain mixed with hail. So our Model A's are now parked on the floor of the Event Center, which would be equivalent to parking on the floor of the SJ Arena. One final note, we met up with the Pelikans from CO tonight.
Posted by Bob M. at 8:05 PM

We love the videos - they came out really great.

Hi all. Great video and the wildflowers are so pretty. So did the girls make it to the top of the rock? Hope the rain stops for you. Say hello to Sharon & Chris for us. Keep safe.
Bob & Shirley