Meneelys, Langes and Kafers departed Bakersfield at 7 AM, in the cool cool morning air, 75 degrees, just right.  Climbed up to Tehachapi (4000 ft altitude) and had an apple turnover at the Apple Shed.  Took a little side trip to the Avenue of the Faces in Tehachapi, which is a park with a lot of carved trees.   Patti’s favorite was the frog. 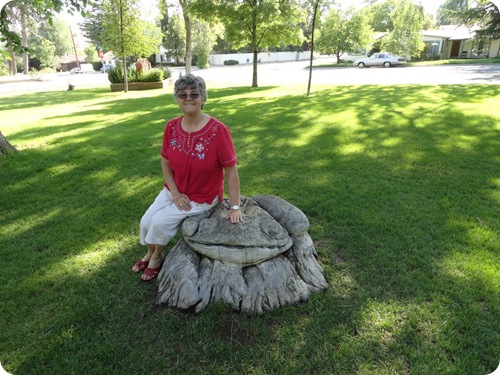 I kinda liked the bear. 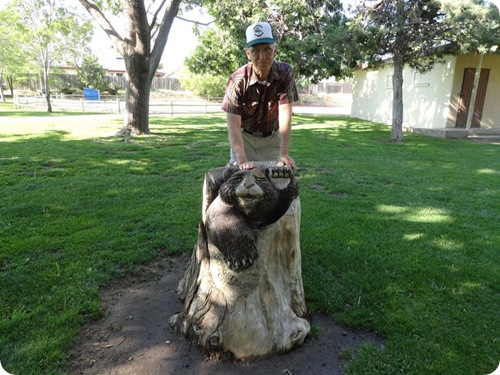 Cruised downhill to Barstow and this is where we picked up old route 66. 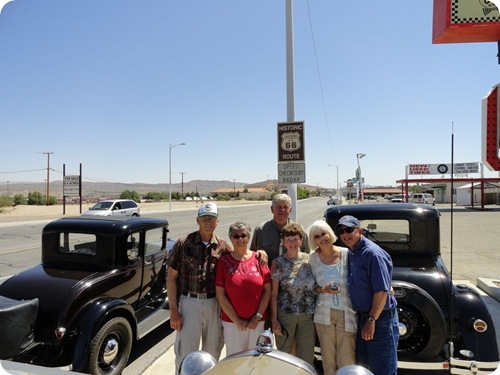 Went to the Harley House Center, for the train museum and the first Route 66 Museum.  While we had lunch we looked up how many Route 66 museums there are on Rich’s I-phone.  Got tired of counting at 12.  We noticed that it was getting warm fast, temperature now up to about 100 degrees.

Stopped in Ludlow for that last gas-up before the old 66 loop to Amboy.  This is where we found real bargains on real estate.  This is Patti and Bob’s new desert vacation home. 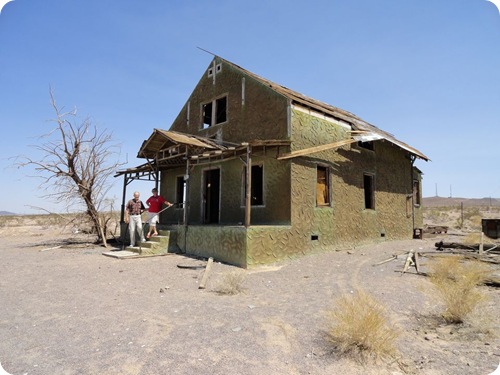 Pat thinks we should start a new Model A chapter here called HTHMAC.  (Hotter than Hades Model A Club)

Stopped at the famous Roy’s Motel and Cafe in Amboy 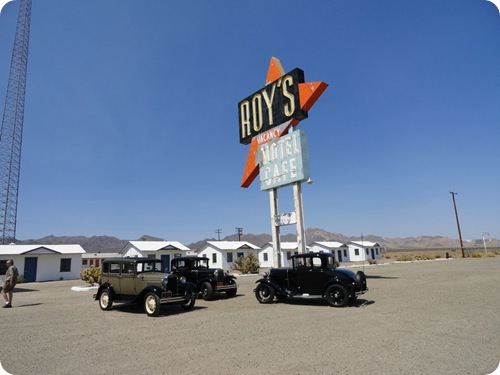 and had a route 66 root beer.  Click here for Root Beer video 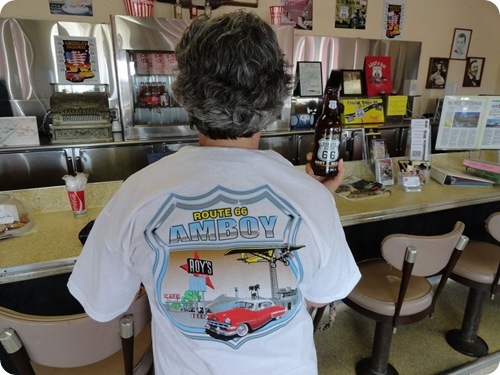 Noticed that the temperature was now up to 104 on the Cafe thermometer.

At this point, we hightailed it to Needles, and got in about 5:00.  When we came over that last pass and came down into the Colorado River Valley here at Needles you could feel it getting warmer even with the air on.  And the temperature in Needles was on the north side of 110 degrees, Whew, thank heavens for those Model A air conditioners.  We were really getting worried about Eldertons and Nicholsons as the sun started to set and the moon was coming up, but they finally  rolled in at 8:00.  Having started in Santa Monica, they really had a long day, but were still smiling and having fun.  Everybody still rolling along okay, Elderton had a glitch with his cooling fan, but he hotwired it, in typical SCVC fashion.

Goodto hear that everyone has linked up. Hope that it's cooler tomorrow, Rodg

Love the blog! Nice to know how your trip is going. You had us worried a little on the first post. Pat's little pick-up came in handy!
AC is definately a GOOD thing! ; )
Chris and Sharon

So, what makes Roy's Diner famous? I think because it still exists?
Wish we were there, all o.k. here. Thanks for the blg.
-Bob & Mary

Sounds like you all are having a fantastic time. Pictures are great and you all look so relaxed and happy. Raining here today. Keep an eye out for tractors. Gene and Carol

Didn't the park have any carved lady bugs for Pat? I thought those were her favorites. Keep staying cool in those A's.

I am sitting here at Bertolotti's thinking how much I would like to see the green speedster drive up . Sounds like you are having a good time. All BE SAFE Bill

Hope Day 3 was great. Rained most of the day here. I spoke with Telalia today!!! Hope things work out. Waiting to hear about your day, whatcha doin? Driving???