Sheridan WY to Canyon Lodge, Yellowstone, 273 miles. Today we had easy flat cruising interspersed with climbs that tested the Model A’s. First order of business for the day was a little sidetrip to Aberdeen, MT to get Nicholsons to Montana just so they could say they have been there. 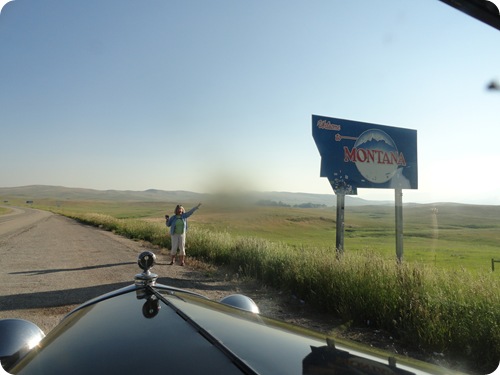 Second order of business was to get over the Bighorn Mountains, beeeeg mountains.  This was a long hard climb for the A’s, pretty much full throttle in second gear overdrive.  The black coupe pumped out a quart of oil on this ascent, and at the top I smelled gear oil.  Both transmissions were really hot to the touch, makes a guy wonder just how good this modern gear lube is.  Pressed on, top of the Bighorns is really pretty,,,, 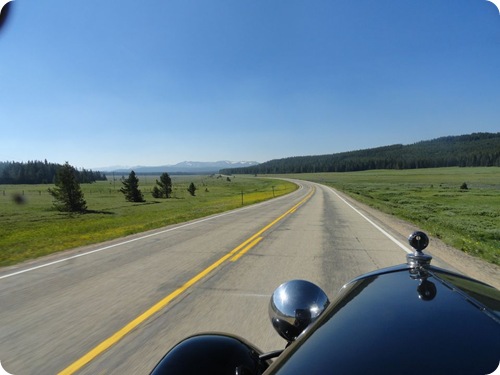 Going down the other side of the Bighorns, we met this gentlemen who is cycling coast to coast, he said he is only carrying 50 lbs of gear, he was about one third of the way up a very long grade. 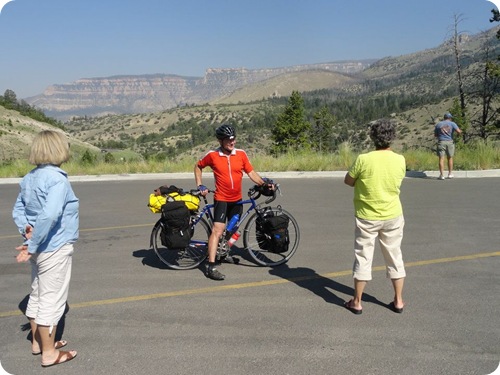 Anyway, bought a bunch of oil in Cody, and off to the Buffalo Bill Museum,  always a great place to spend time and refresh our sense of history. 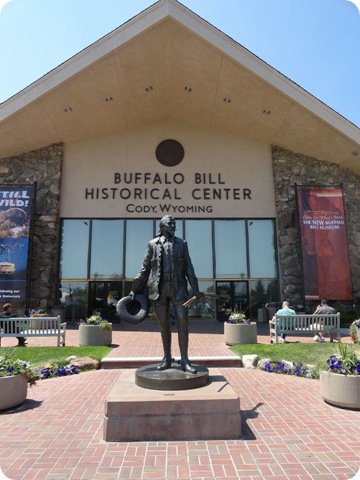 When you leave Cody, it is another long climb up into Yellowstone, this time we were rewarded with a snowbank at the top, had to throw a few snowballs, only thing I hit was Bill’s car.  Linda Nicholson discovered her shoes were too smooth to climb up the snow, I missed the shot of her sliding back down on the seat of her pants. 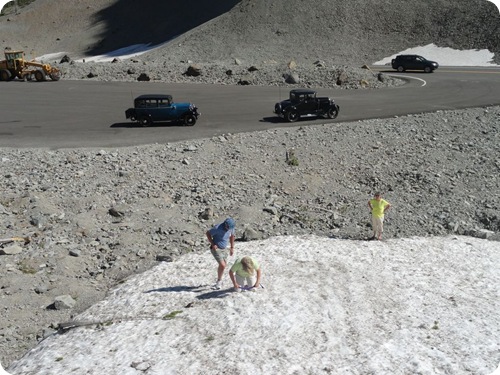 Numerous stops to look at elk, bison, and fumeroles, and mud pots, this big fella was sitting beside a mudpot just watching the tourists go by. 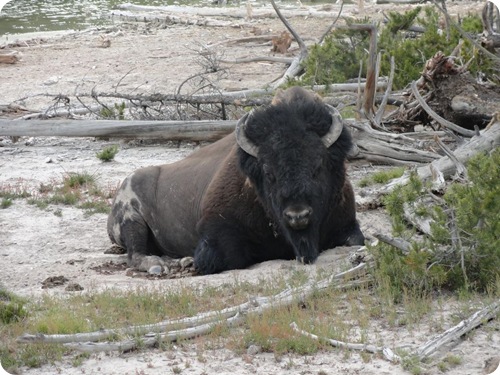 Arrived at Canyon Lodge, our abode for the night is kind of a rustic shack in the trees, no tv, no internet, no cell phone, so we are roughing it. 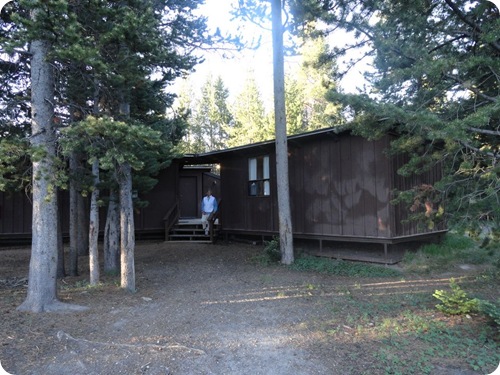 Patti only jumped out of bed once when she found an ant crawling on her. (Well, it was really BIG.)

Tomorrow we leave our traveling buddies and head out on our own, making tracks for home.  Hey,,,, it’s downhill from here.

Looks like a fun day. (except for the looong grades)The snow must have been a welcome relief.
B& M

We wish you a safe and speedy trip home. Try not to get into trouble as you will be on your own (except for the angels who are watching over you).

In contrast to your up & down hills, we took a ride on a tall ship. It was captained by a twenty something woman who did one hellva great job getting that tall masted, multiple sails ship in & out of port. Pierce car show tomorrow at the Gilmore Museum, banquet tomorrow night the. Headed for Kansas on Sunday. Little green Model A is holding her own as she runs with the big boys.
Janet