Custer, SD to Sheridan, WY, 333 miles.  We started early and finished late.  First stop was to catch a picture of the Crazy Horse monument, click on picture for big image. I don’t think they have made much progress since we were here in 2006. 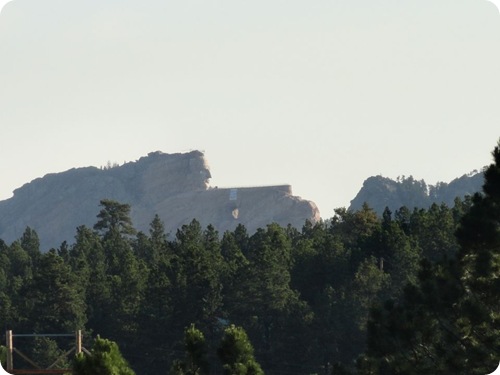 Stopped at Deadwood and ended up in the cemetery at Wild Bill Hickok’s grave, and next to him is Calamity Jane, amazing how many people trudging through the cemetery just like us,,,, 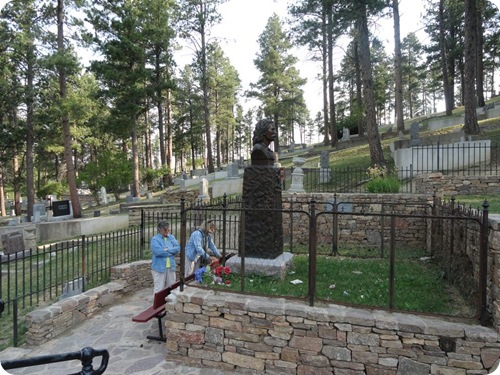 Off to Sturgis, we were a little early for this years main event, but it was fun to poke around. This is the center of all the action. 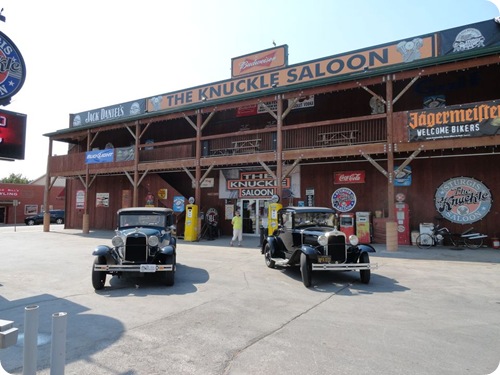 Girls had to clown around,,, 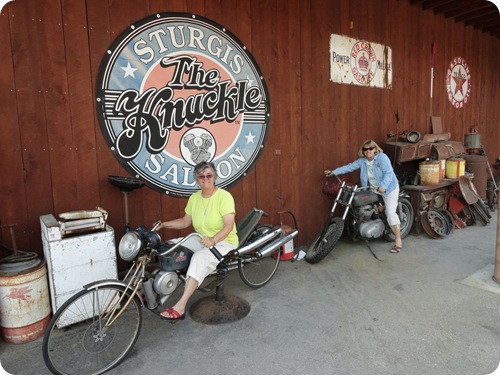 We met Pete, the voice of the Sturgis rally, they pipe his voice all over town, he said about a million people show up at some time during Sturgis month. 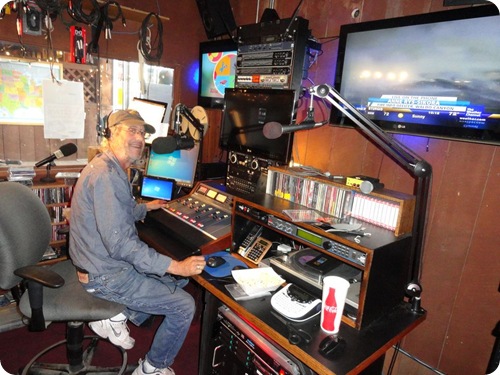 Ran across a guy in the parking lot, a retired optometrist, who was restoring a Model A and asking us some questions, so we asked if he had any spare parts, since Bill Nicholson needs a breather cap.  He said no, but we should go talk to Father Karey at the rectory, because he has Model A’s, and just gave an engine away.  So off to the rectory, but Father Karey was out doing a mass somewhere but they said go over to the mortuary and talk to Randy the mortician, he might be able to help.  By this time Bill is hot on the trail and we are all wondering where this is going to lead us.  Bill found Randy the mortician in the basement of the mortuary and he informed us that the recipient of the engine was Motorman Mike, and gave Bill a phone number.  Now we are really getting close, Bill dials up the number and finds himself talking to Dave the gravedigger.  At this point we are having trouble keeping straight faces and Linda is howling with laughter. 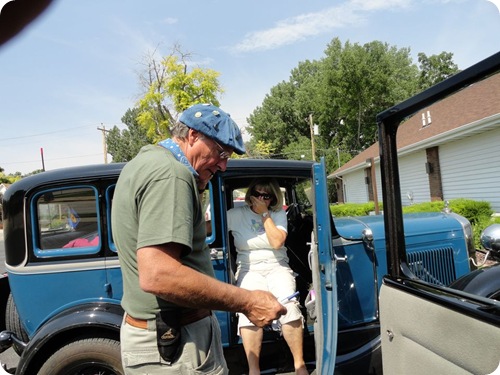 But the phone call was not entirely in vain, Dave did have Model A parts but they are all in Hill City which we drove through an hour ago.  One more trip to see Dave the Mortician, and Bill got the right phone number for Motorman Mike.  Hot dog, Motorman Mike says yeah, there probably is a breather on the engine but it is in Rapid City.  Downer, he did offer to talk to Randy the mortician and have him take one off his car and Mike would promise to replace it but Bill told Mike that Randy was with a “client”, thanked him, and so concluded our quest from saloon to church to the mortuary in pursuit of the holy breather cap.  We all had a good chuckle. And declared that Model A Bill is a “character”!

By this time, we had burned too much time in Sturgis, so we made tracks for Devils Tower.  Does this picture look vaguely familiar, John? Sacred place for the Indians, and you can see why,,,, 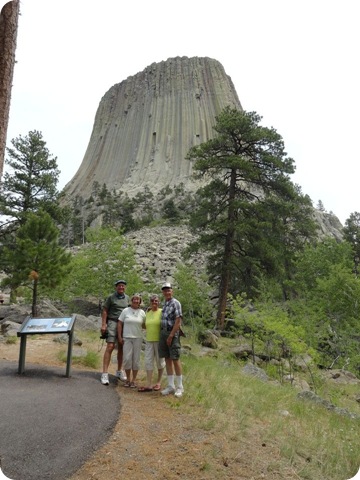 By this time, it was 2:00 and we still had 170 miles to go.  So we ground it out on Interstate 90.  We had a howling headwind, full throttle the whole way, and knocked down to 40 on any grade.  Fortunately, those A engines are tough and since we were at 45oo feet and up, probably only making 2/3 power anyway.  It was very smoky and hazy all the way and you could smell wood smoke very strongly, and the sun could barely make a shadow. 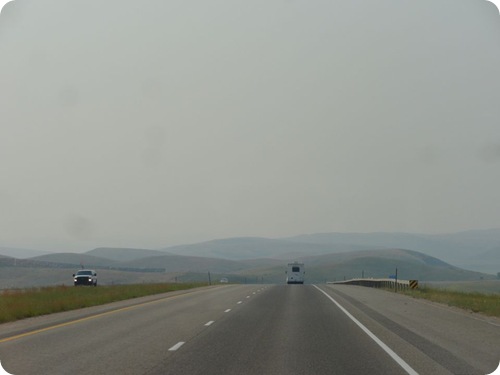 I had noticed earlier that my gas mileage was going to hell and I felt like my power wasn’t up to snuff on this windy stretch, and the mixture knob didn’t respond like it had been, I ended up running with the mixture knob shut off, what’s up with that???  I puzzled over that so when we got to Sheridan, I had a look at the carb and this is what I found,,, do you think that had anything to do with it? 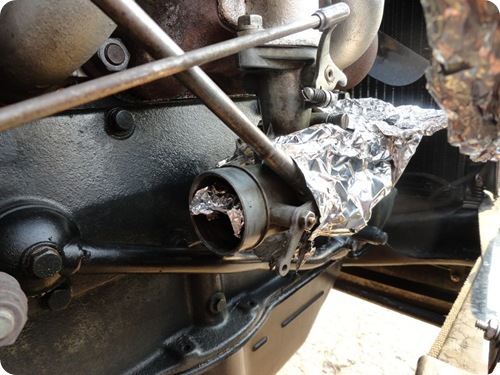 And here is a tech tip on a different subject.  As you know, I am a big proponent of using anti-freeze in the cooling system because of the anti-corrosion properties. Today, I discovered another reason to use antifreeze, if you spring a leak on the road, (hose clamp loosened somehow) you can smell the antifreeze and get a heads up before you lose all the coolant and get into a heating problem.  What a day, had dinner at a place called Sanfords Pub and Grub, with $1 beers, today was a two beer day, if you ever see a Sanfords, be sure and stop, decor is jam pack memorabilia and Americana.  Onward to Yellowstone!!!

LOL! Felt like I was reading a Model A version of 'Who's on First. What's on Second.'! LOL!!

For the untrained eye, what's wrong with the pic? I'm guessing the piece of foil in the pipe?

Good Golly, Miss Molly!! What a story about the rectory/mortuary/gravedigger. Typical Meneely lore. Hey, we've never been to Yellowstone and probably won't get there. Could you bring us home a yellow stone?

Wow - now we are having fun!! What an exciting day. I like the "Model A version of Who's on First" Only a few more days!!! What will you do for daily entertainment then???
Be Safe.
Mary & Bob

We are right behind you in Deadwood. 6/28 we are having lunch. Off to ranchester tomorrow. Wayne and Julie

Sounds like Bill has a new job as mystery director or is it in the funeral bus.

When I went to feed the birds today, I found a deer eating fallen apricots on your patio. I picked up a few for myself before the deer got to them! There is still a nice tree full. We hope you guys have made it through the smoke from the Colorado fires by now. All is fine on the home front.
Mary & Al

As the weary travellers continue on their desperate attempt to find their way home, they find a little piece of Heaven in Sturgis.
HOLY COW, YOU GUYS! COME HOME!
Bob& Mary

The Devil's Tower...my favorite place. Worth seeing at any price! Is that a zenith carb I see? It has an appetite for aluminum?
J&J